As far as temperature goes, there was little or no sign this morning of the impending 'cold snap' as predicted by the weather forecasters, but it was the sky, or lack of it, that told the story. Completely obscured by the most foreboding clouds it seemed inevitable there would be some precipitation before the day was out, and there was! 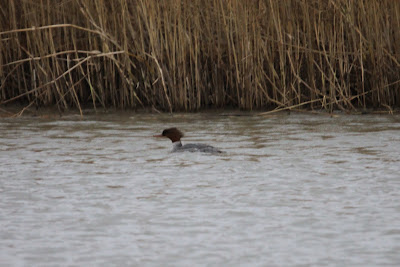 Very quiet once again on the bird front, this female Goosander on Radipole Lake was the only sighting worthy of notebook status but there were a couple of other things to keep the mind active. 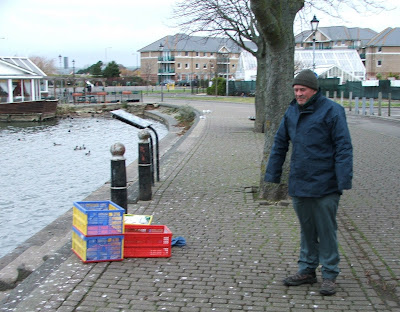 It wasn't long before I encountered Terry Coombes (close to the Gurkha Restaurant top left) overseeing yet another session of Wildfowl ringing. By laying a trail of corn and bread for the Ducks, they are very easily tempted to get withing arms length, but then comes the tricky part of snatching them from the water. 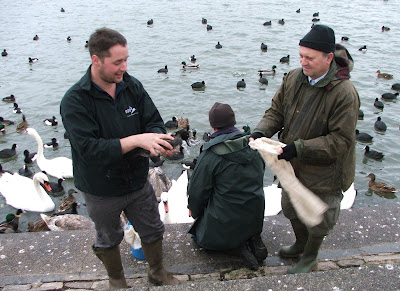 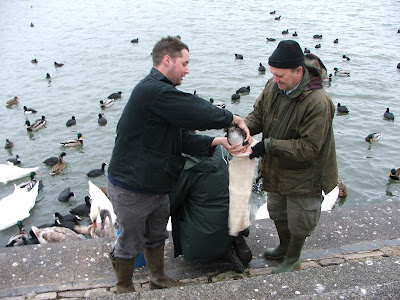 which is gently placed in a sack prior to 'ringing' and, with all biometric measurements taken, returned unharmed to the lake.

I have to admit to a quiet chuckle, every time I see this operation, at the story some time ago in the Dorset Echo, reporting these people as 'stealing' the ducks for the restaurant trade. I'm sure the well meaning member of the public who reported them has long since been forgiven?


At last, here is a short footage of the Hooded Merganser 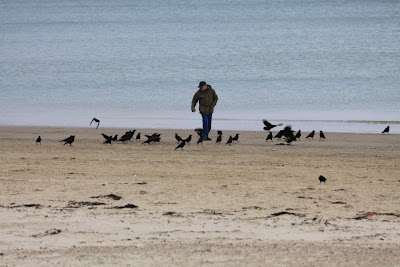 On the beach, the familiar sight of this man who regularly feeds the host of Carrion Crows was the last of my avian delights for the day as I had far more interesting things to do - SHOPPING! Not that I've ever tried it, but I feel it would be preferable to stick a needle in my eye, but there comes a time for each of us.

A trip to Dorchester always softens the blow, plus a new pair of boots, 2 dozen Quail's eggs, an oven ready Guinea fowl, 2 bottles of Sauternes and a grit lump of mature Stilton made it all worthwhile.

Back home, I continued what has been a 3 day retrospective listen to the music of 60's iconic trio 'Cream', and coupled with a visit from fellow 'birder' and music buff Dick Morris, I wish I'd stayed home all day. Last night I played, among others, their first album 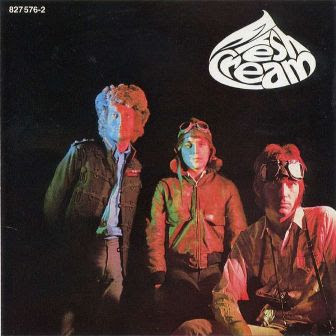 on which they render their own interpretation of the Willy Dixon penned classic 'Spoonful'. When Dick arrived the Royal Albert Hall Reunion gig was on the turntable, and coincidentally the same track, which was the catalyst for some serious, in depth muso chat.

I had to relate to him how this track alone had captured me, and enslaved me forever as an ardent Blues follower. On a late November evening in Southsea, Hampshire in 1963 I visited the Kimbles Club on Osbourne Road to be confronted by a group of 'Herbert's ' under the heading of 'The Falling Leafs'. I was immediately captivated by their renditions of 'black blues' numbers allowing me an accurate idea of when I was first sold on the genre. Returning home on Christmas leave a couple of weeks later, I reported to my mum (also something of a muso) that something was about to visit us, the likes of which we had never heard before! 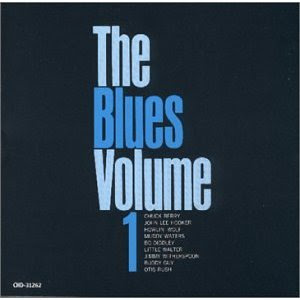 This was my present from her that year, which includes in the play-list not only Mr Dixon's number the the equally dramatic Buddy Guy composition 'The First Time I Met The Blues', how appropriate! The rest is history.
I have encountered the 3 members of 'Cream', under various guises over the years and as mentioned in yesterdays post both Bruce & Baker as part of the Graham Bond Organisation. Clapton unwittingly led me to another dimension when I first saw him perform at the Southampton, Ritz with what has long been my top British Blues Band - John Mayall's Bluesbreakers, but the most amusing of all these encounters involved Ginger Baker. 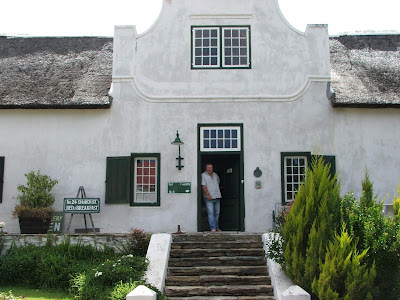 Arriving in the small and quaint South African town of Tulbagh, priority was a bed for the night, which 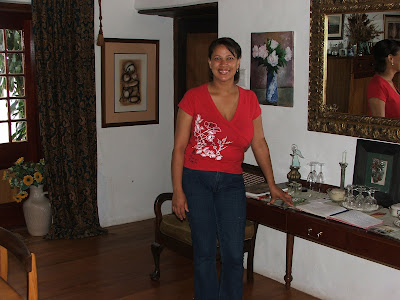 mine host Lucy was able to provide at less than extortionate prices. 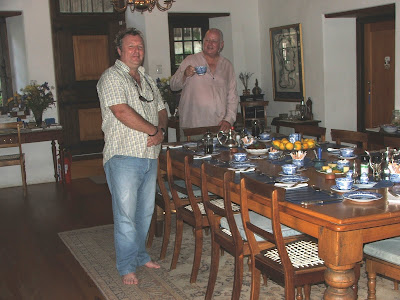 I don't remember the tariff but it was certainly the best value B&B the 'Fat Kid (Jim the Medic' and I had ever encountered. 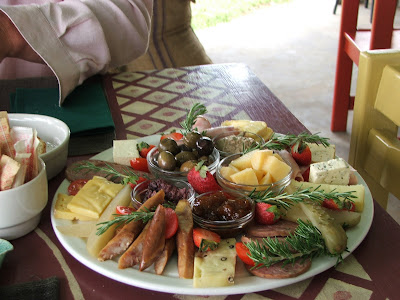 That evening we ate, among excellent company but that's another story, at a little al fresco restaurant just up the road. There, to cut a long story short, we were told of the town's most celebrated resident, one Mr Peter Edward 'Ginger' Baker, and how he regularly took lunch at another eatery just around the corner. Next day, at the suggested hour, we too dined there rubbing shoulders with the great man at the next table, and it was the following day as we left town I nearly suffered a broken neck. 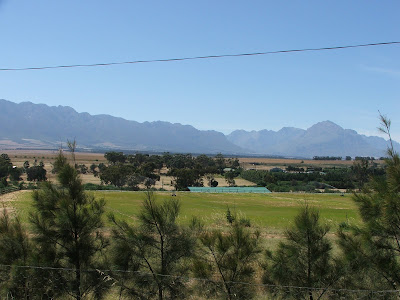 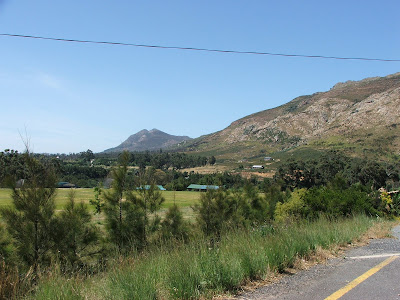 and swimming pool the Skinny Youth suddenly hit the anchors shouting "did you see that". I was sure he had, at long last found me Bennett's Woodpecker, but no, he had seen 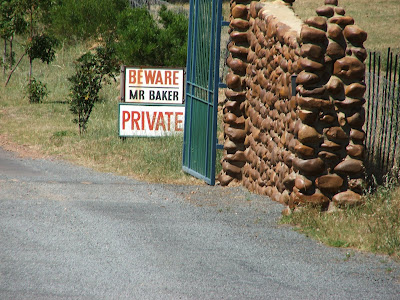 this sign at the entrance to the Cream drummer's residence - we didn't venture in! 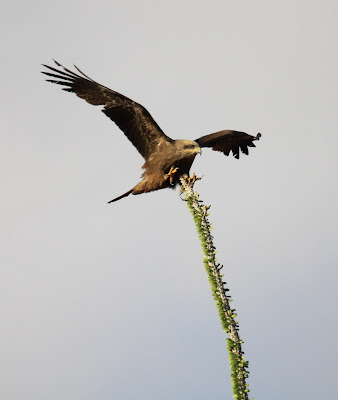 and finally, as I was once again editing photographs from the Madagascar trip last night, this one of a Yellow-billed Kite, caught my fancy.
Posted by Bagsy at 18:12