More Of The Same

The tentative plan for today was to meet up with my new 'birding' mate Mark Hill, but it was a loose arrangement with no time or place arranged. I do like to get to 'the office' early, and as I did so 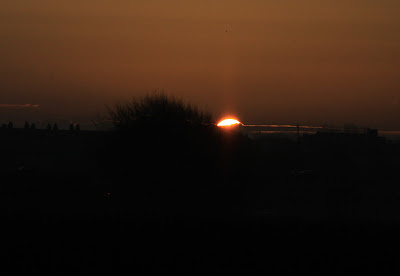 the Sun peeked above the buildings on the Weymouth seafront as I took a first scan across Radipole Lake. It certainly had the feel of another quiet day but as the weather was bright, sunny and not what you could describe as cold, best enjoyed considering what is predicted for the next few days. 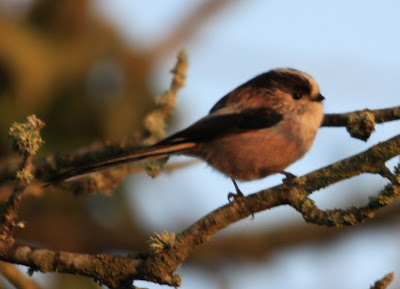 Again Long-tailed Tits abound, this just one bathed in early morning rays along the Buddleia Loop where already the lagoon had frozen over again. At the shelter a Marsh Harrier flew up to the North Pool area where already there was a Common Buzzard sat on a bush. Otherwise it was similar to the last few days with a Water Rail putting in a brief appearance (always a welcome sight), as what looked like the same group of 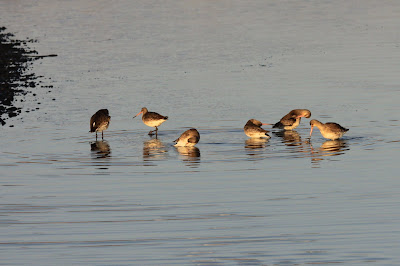 carried out their ablutions close to the Visitor's Centre. 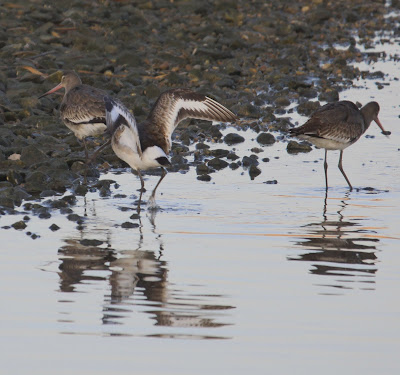 Here, one is obligingly showing the 'black tail' and diagnostic white wing bars, while across the water a number of Common Snipe seemed recently arrived taking advantage of today's lower water level.

Still determined to get video footage of that striking little duck the Hooded Merganser, I made for the sluices but again it couldn't be found.

Out of sheer frustration I did take this short passage of Tufted Duck, which hope will suffice until we can bring you the real star of the show!

A short text proved that Mark had walked north over the bridge only a few seconds after I had cleared to the south, but in the event we met up and were soon on our way to Lodmoor. There we walked the northern and eastern perimeters with little to show for it, but on the south path these

Coots made for an interesting and maybe regimented picture. Further along we found the Long-billed Dowitcher which was one of only 3 species of Wader we saw today, the others being c2 Dunlin and just a handful of Lapwing. 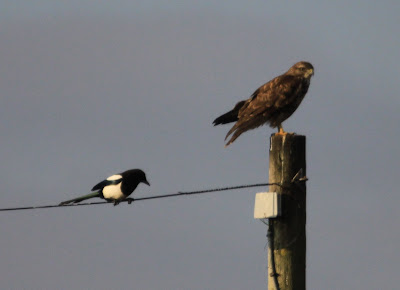 Similarly to Monday, c2 Common Buzzards were present (this one seemingly having befriended a Magpie) 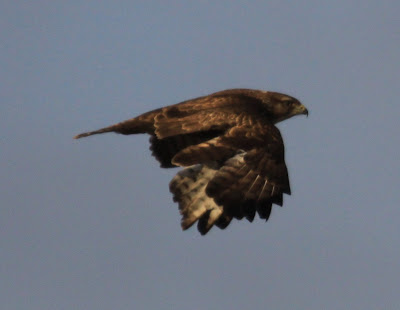 but soon flew off across the Moor, while the second seemed content sat atop 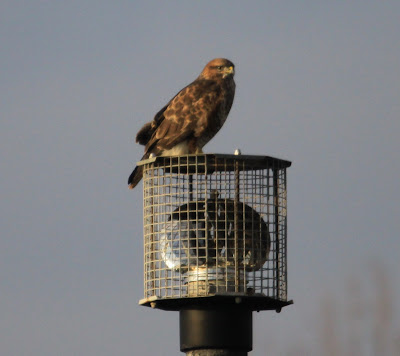 one of the methane breather pipes which relieves the now redundant council tip of this unwanted gas. 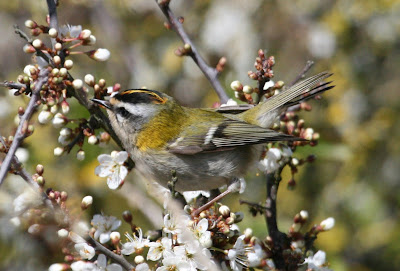 Almost back to the exit and I heard what I thought was a Firecrest in the waterside bushes, 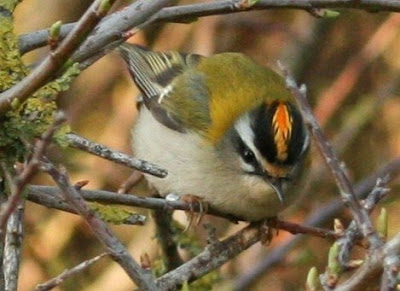 and with a degree of patience we were rewarded with a few glimpses of one of my personal favourites. There are no apologies for dragging these 2 images out of the archive, as I would happily publish such shots every day. 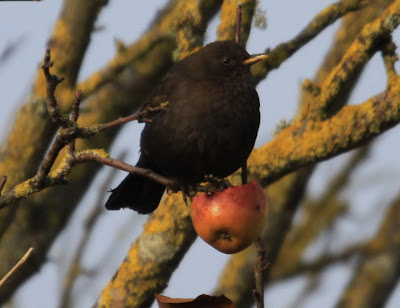 Our final sighting on the Moor was this Blackbird enjoying one of the last of the (feral) apples that grow close to Weymouth Bay Avenue. These trees are thought to have originated again from domestic council rubbish tipping?
To complete our days observations we returned to Ferrybridge, where the male Goldeneye was still present, but no sign of the 2 fems. However, a female Goosander had turned up (will that do?) as c3 Sheduck flew across the Fleet and out to the open sea. All else were a few dozen Red-breasted Merganser and the now 'winter resident' Little Grebes. We'll have to see what the promised 'cold snap' of the next few days brings!
Posted by Bagsy at 19:16