Where the Shadows Run From Themselves

There will definitely be tears before bedtime, having decided on a re-listen to the 'Cream' Reunion at the Royal Albert Hall while composing today's Blog. I'll keep you posted as we go!
After a most pleasant evening over a meal and a pint or two with Dick Morris, Peter Coe and Paul Harris yesterday, the latter sent me this rather interesting photograph of what we are calling 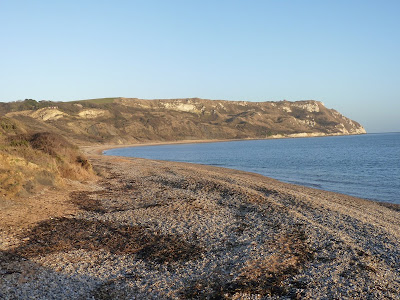 The Purbeck Serpent. The sweep of shingle beach in the foreground curving into Ringstead Bay forms a perfect tail, while the head of the monster is characterised by the headland of White Nothe.

So, on to today which both bird and weather-wise was 'quiet' to say the least, with the wind backing those few degrees into the north it already feels like the predicted cold snap is upon us again. With nothing to report close to home it was straight to Ferrybridge where I met and enjoyed a couple of very pleasant hours with long time friend and fellow 'birder' 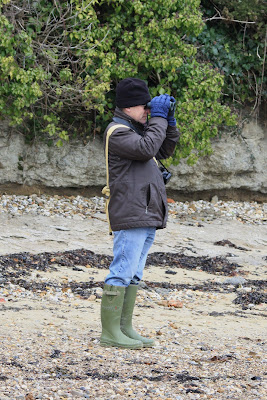 Exchanging our finding thus far, between us we had seen a fine male with 2 female Goldeneye by the Small Mouth Channel, a few Red-breasted Merganser, c5 Little Grebe, a Common Snipe, c3 Fieldfare plus a host of Dunlin, Ringed Plover and Mediterranean Gulls. There was also an interesting Wader that I had seen before Bob's arrival, somewhat smaller than a Dunlin and giving high hopes of a Stint, but I had not seen it well enough and we didn't relocate it so that goes down as a miss (for now). 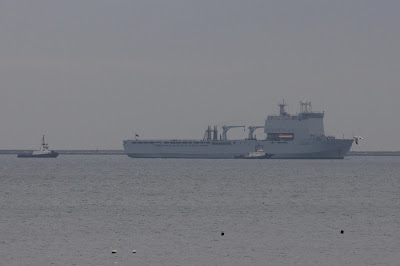 We walked together the southern section of the Rodwell Trail, which bounds the southern limit of Portland Harbour, across which we could see a couple of tugs easing the Royal Fleet Auxiliary Logistic Vessel 'Mounts Bay' to her berth at the Outer Coaling Pier. This brought back a few memories for me, as for a number of years I was heavily involved with Harbour Tug work. 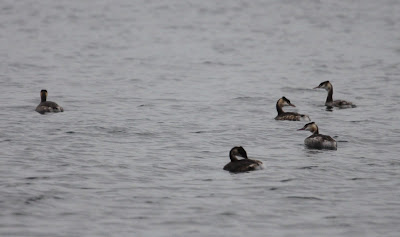 Here too there was little to see, so these 5 (of at least 25) Great Crested Grebe brought some relief, while distantly there were between 8 and 10 Black-necked Grebes and closer by c3 Mallard.

Said I'd keep you posted on the 'Cream' concert as we go, that was 'Toad' Ginger Baker at, arguably, his very best. The date now pales, but it must have been '63/'64 at Klooks Kleek, Hampstead when I first witnessed Mr Baker (no relation) 'live' as part of the irrepressible 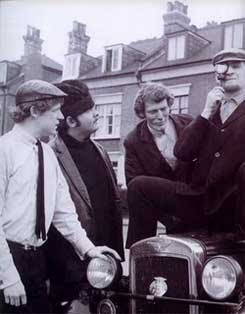 Graham Bond Organisation
l to r Jack Bruce, Graham Bond, Peter Edward (Ginger) Baker & Dick Heckstall-Smith (the only person I've ever witnessed playing 2 'reed' woodwind instruments at the same time - circa John Mayall's Bluesbreakers).
In those days Ginger's party piece was a little ditty entitled 'Camels & Elephants' which the history books record as his first recorded drum solo. 'Toad' (along with Pressed Rat & Warthog) have since become the signature of the worlds finest 'white' blues drummer - arguments on a post card please!
Given the lack of action, what better opportunity to present a few more, previously unpublished images of Madagascar. As with the last short series these are with the compliments of fellow traveller Maria Djumic. 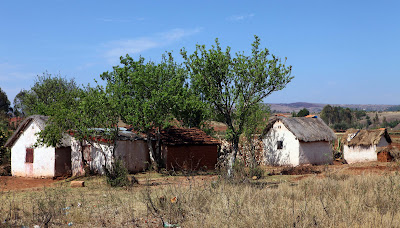 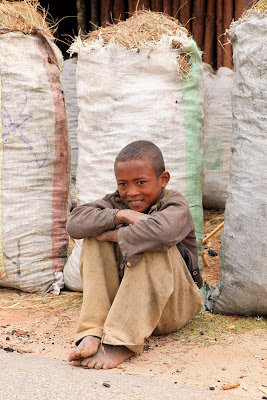 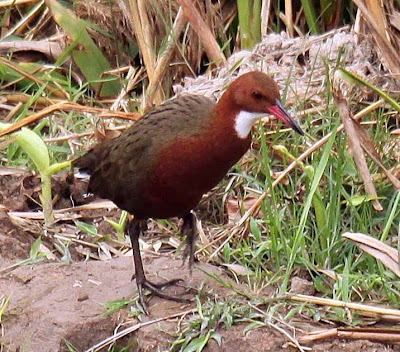 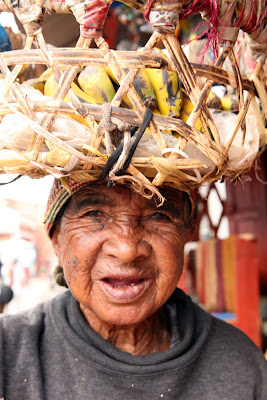 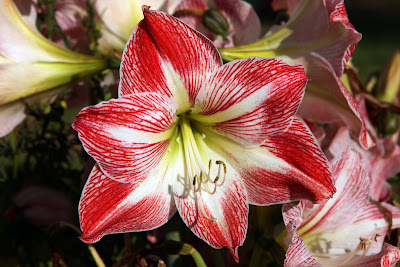 Eric Clapton has never been my favourite guitarist, in fact he only reached my top 5 during his brief stay with Mayall and what has become known as the 'Beano' album. His finest hour, for me, came during the George Harrison Tribute Concert (coincidentally again performed at the Royal Albert Hall) where, along with Billy Preston, they prised the mortar from the brickwork! On the Cream re-jig he caps the whole thing with his unique, (almost hidden) itchy staccato riff on 'Deserted Cities of the Heart', taps full open at this time for me. 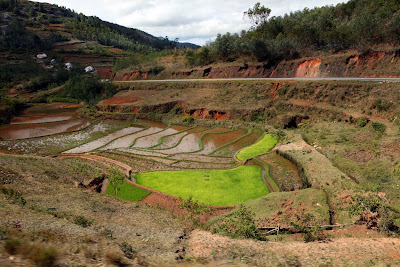 Rice Paddies, the bright green areas are the 'nursery paddies' where the seed is sown 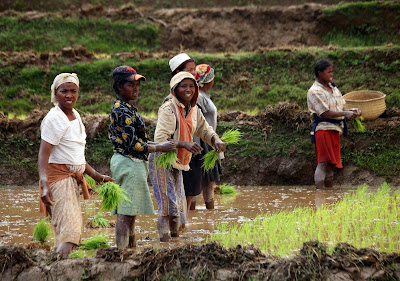 and at the right time dug up and transferred to the main fields. 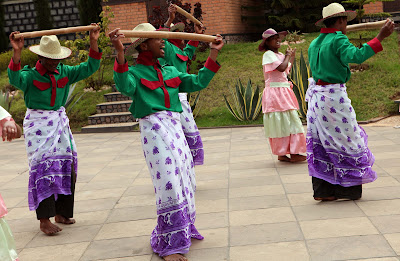 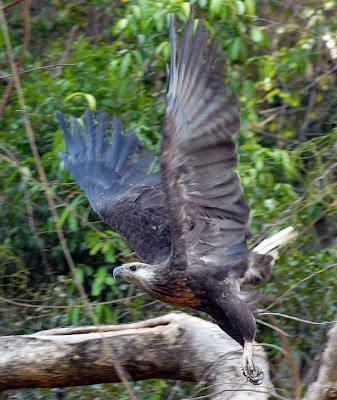 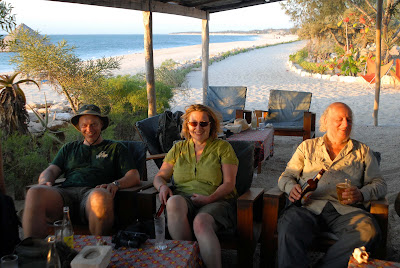 and after another tough day at the office the chance for a 'sun-downer'.
Jonas Christiansen, Maria and Moi

and on this very day, John & Kathy in Australia sent these 2 shots of a few of us aboard a 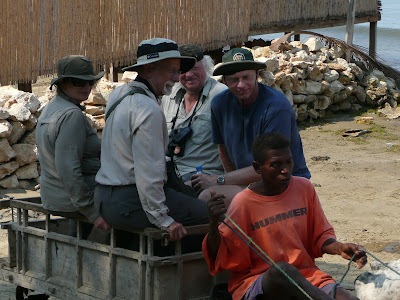 Zebu Taxi, being taken out to the speed boat, and 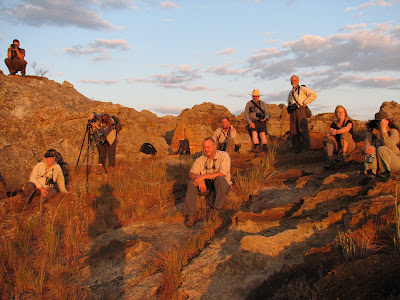 members of the group awaiting sunset atop a small mountain. Bet you remember this place (Best Mate) Maria, least said eh?
It wouldn't be possible for anyone to level a sensible argument against the fact that Jack Bruce is the finest blues bass player these islands have ever produced. His underrated prowess as vocalist and harp player need urgent redress. Let me suggest a whack at 'White Room' on this DVD, and if that don't do it for you then your surely 'Lost at Sea'!
In the white room with black curtains near the station.
Black-roof country, no gold pavements, tired starlings.
Silver horses run down moonbeams in your dark eyes.
Dawn-light smiles on you leaving, my contentment.

You said no strings could secure you at the station.
Platform ticket, restless diesels, goodbye windows.
I walked into such a sad time at the station.
As I walked out, felt my own need just beginning.

I'll wait in the queue when the trains come back;
Lie with you where the shadows run from themselves.

At the party she was kindness in the hard crowd.
Consolation for the old wound now forgotten.
Yellow tigers crouched in jungles in her dark eyes.
She's just dressing, goodbye windows, tired starlings.

I'll sleep in this place with the lonely crowd;
Lie in the dark where the shadows run from themselves.

and finally, an E-mail just as it arrived, with the coincidental reference to 'Starlings' and the lyric above, another 'Twitcher' in the ascendancy I fear!
Thanks Johnny.
Cap,n Bagsy, Since meeting you on the esplanade, where you kindly gave me your card. Have "blogged" every day since. Just to say thanks. Brilliant, really enjoy your diary. I saw a starling yesterday, see what I mean ! regards Johnny Read.
Posted by Bagsy at 18:30