Snow in Weymouth is about as rare as 'free drinks' in JD Wetherspoon's (pub), but it does happen on occasion as it did today, not the free drinks I hasten to add. Even at 07-00 and still under the cover of dark, I could hear the squeals of children enjoying this infrequent happening building snowmen, snowballing and sliding down the road. I doubt there was a parent in the Borough who had difficulty getting their kids out of bed as by the time I 'hit the trail' this was the scene. 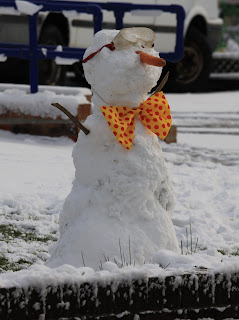 "Hey, there's a Snowman, look, look what a Snowman" - lyric from 'Snowbound' from the album 'Then There Were Three' by Genesis.
With Lapwings flying north, Skylarks heading south and a few Redwing and Fieldfare a little unsure which way to go, it was obvious my garden House Sparrows were in need of a few groceries so last nights left over 'yellow peril' (smoked haddock), toast, a few chopped apples and a tin of corned beef seemed to do the trick. 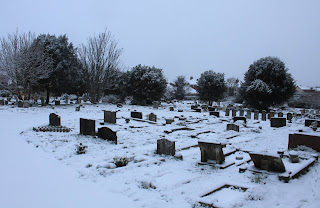 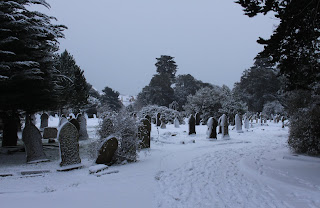 or that of the attendant Sparrowhawk darting between the trees and the stones without result. 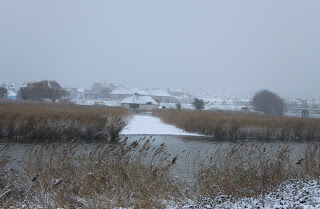 However, all of this was highly picturesque so resided myself to the fact that this was going to be a 'snow scene' sort of day and started by enjoying the view towards the RSPB Visitor's Centre (VC) at Radipole. 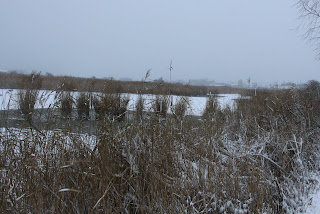 Looking back across the Buddleia Lagoon, this was once again frozen solid but one or two birds were now showing including c2 Reed Buntings and a Great Spotted Woodpecker which seemed to have found something edible in the frozen earth? 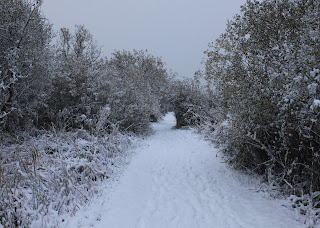 The eastern path of the loop was equally eye-catching but not as much as the too long absent party of Bearded Tits feeding in the reed litter. 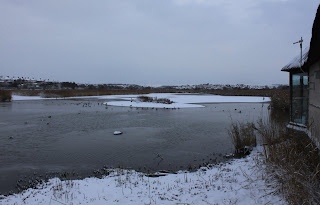 As for the rest of the reserve it was case of Long-tailed Tits and what can clearly be seen from this image, an array of Gulls and a couple of Shelduck outside of the VC. 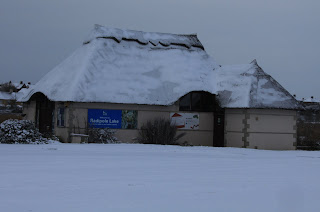 While I have no interest in advertising the RSPB the VC did look much like a Christmas card this morning. 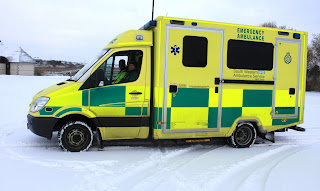 Then, all of a sudden there were a couple of my mates, Paramedics Adrian Baker (driving) and Jeff Jones just a couple of hours into what could prove to be a very busy shift? They had already had a few 'call outs' and in very quickly time they disappeared under a scream of sirens up King Street, I guess to save another life or two. The whole community, I'm sure. are grateful your there! 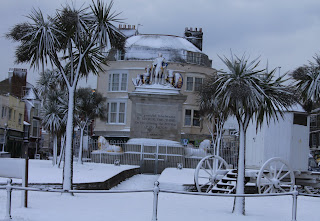 One of the best pictures of the day was at the statue to King George the Third in the centre of Weymouth, where he looks down upon a 'bathing machine' (which he immortalised in our town) and, yes, they are palm trees. 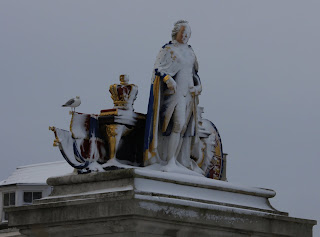 A closer look reveals he's been hit in the coupon by a snowball, despite being guarded by a Regal Eagle (it's a Shitehawk really). 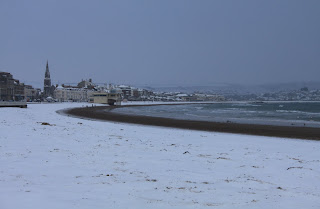 The sweep of the bay and 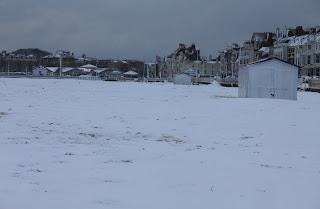 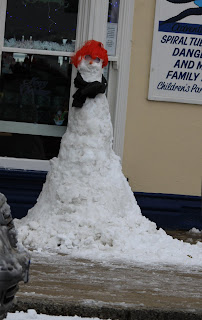 Snowmen were popping up everywhere. 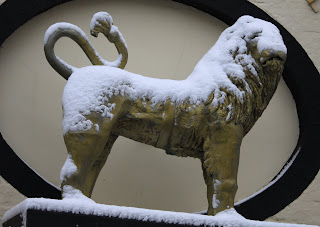 Even the Golden Lion in St Edmund's Street took on a snowy feel, and seemed to be saying "it ain't like this on the Serengeti mum"! 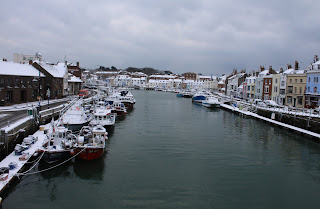 The Inner Harbour was too much of a temptation to miss on such a day, 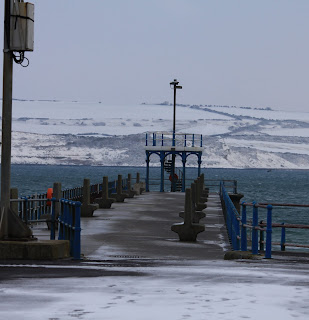 and from the vantage point of the Stone Pier 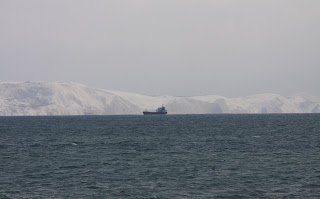 a single merchant ship could be seen at anchor in the lee of the snow covered Purbeck Hills. 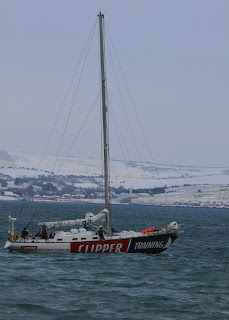 One of the 'Clipper Sail Training Flotilla' did poke her prow around the corned of the pier head, but thinking better of it the skipper was re-secure alongside when I walked back, with the crew enjoying a hot drink. 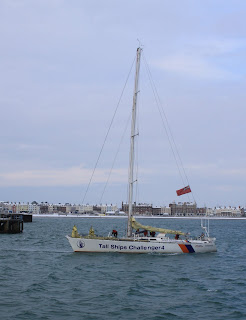 On the other hand you may say the 'Tall Ships Challenger 4' crew were made of stouter stuff (or more fool hardy) as they left harbour under astern propulsion and set sail. 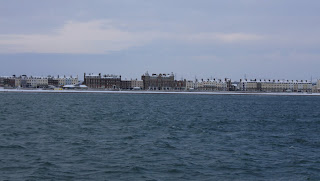 took on a different dimension in the snow, and 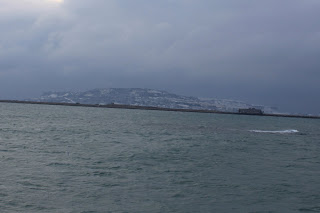 looking through the gloom it could be seen that Portland had received their share of the 'white stuff' as well. 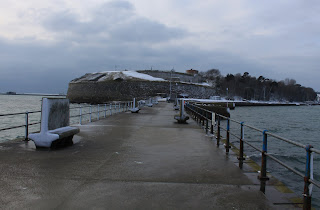 Walking back towards the Nothe Fort, built by Napoleonic prisoners, 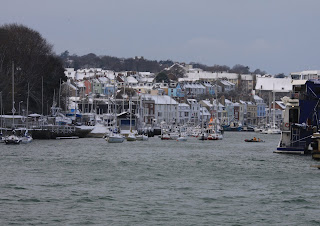 the south quayside buildings open to view as did this sign on my favourite Weymouth fish & chip shop, owned by my good friend Vinny (the Chip) Johnson. 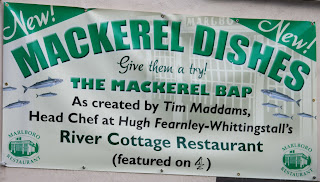 Purely coincidentally, my snack for today was smoked Mackerel in a bread roll, a morsel that just about every fish lover in the land has enjoyed at one time or another. Then to note that this ancient dish is now being claimed as the creation of some pseudo, pretentious, wee tw*t down in Bridport beggars belief. Maybe once you get on the TV you can claim to be both a personality and an inventor, but I suggest Mr Maddams, and maybe his equally annoying gaffer (Hugh Fearnley- 'hyphen'- Whittingstall), need to get out a bit more often!
and finally, ever inspired by poetry and lyrics, whether they be Punk or Puccini, I played the afore mentioned Genesis album while composing this, and leave you with a few words from 'Undertow' (track 3):-
The curtains are drawn
Now the fire warms the room.
Meanwhile outside
Wind from the north-east chills the air,
It will soon be snowing out there.

And some there are
Cold, they prepare for a sleepless night.
Maybe this will be their last fight.

But we're safe in each other's embrace,
All fears go out as I look on your face -

Better think awhile
Or I may never think again.
If this were the last day of your life, my friend,
Tell me, what do you think you would do then?

Stand up to the blow that fate has struck upon you,
Make the most of all you still have coming to you, [or]
Lay down on the ground and let the tears run from you,
Crying to the grass and trees and heaven finally on your knees

Let me live again, let life come find me wanting.
Spring must strike again against the shield of winter.
Let me feel once more the arms of love surround me,
Telling me the danger's past, I need not fear the icy blast again.

Laughter, music and perfume linger here
And there, and there,
Wine flows from flask to glass and mouth,
As it soothes, confusing our doubts.

And soon we feel,
Why do a single thing to-day,
There's tomorrow sure as I'm here.

So the days they turn into years
And still no tomorrow appears.

Better think awhile
Or I may never think again.
If this were the last day of your life, my friend,
Tell me, what do you think you would do then?

Stand up to the blow that fate has struck upon you,
Make the most of all you still have coming to you, [or]
Lay down on the ground and let the tears run from you,
Crying to the grass and trees and heaven finally on your knees

Let me live again, let life come find me wanting.
Spring must strike again against the shield of winter.
Let me feel once more the arms of love surround me,
Telling me the danger's past, I need not fear the icy blast again.
Posted by Bagsy at 17:42