Goin' To My Hometown - Rory Gallagher

One of the final words, but not visits, on Cork, Republic of Ireland goes, quite rightly, to the 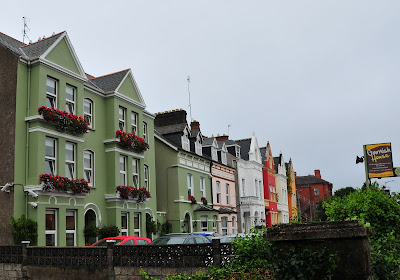 GARNISH GUEST HOUSE
If you only have the slightest inkling that one day you may visit the vibrant, charming and wonderfully exciting city of CORK in Eire, then please click onto this web-site and commit details to your diary. The ultimate accolade would be if you truly put 'hand on heart' and swear you didn't like it, then I will foot the bill! 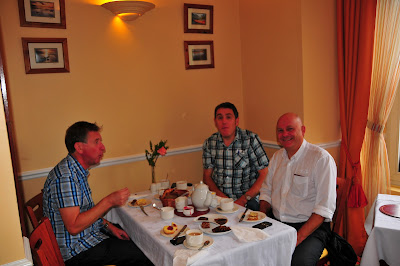 On arrival you are met by the owner, whose name we foolishly did not note, offering the most genuinely warm welcome you could ever receive along with a complimentary 'Cream Tea'. 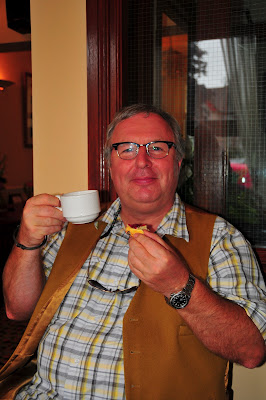 There is a method to this madness, as Jim the Medic would tell you, as munching through an array of pasties and sipping fine teas or coffee a feeling of well-being overcomes you along with a few minor 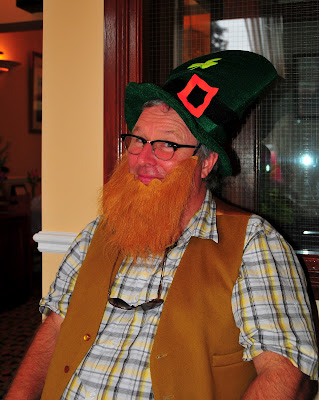 Physical Changes as well. In full Leprechaun mode you will be truly ready to enjoy all the city has to offer. 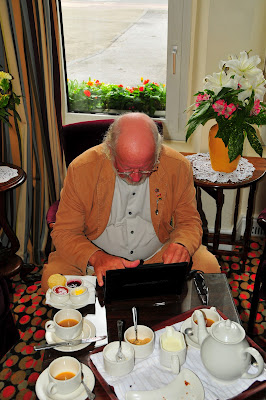 In addition, each time we returned to the house we were offered tea and coffee along with a huge plate of cakes and pastries, free of charge, much needed by your correspondent slaving over yet another computer glitch! Some mention should be made of the breakfast menu that consists of 'traditional' grilled, scrambled eggs with smoked Salmon, a 'fish of the day', fruits, pastries et al but best of all Porridge with either Bailey's Irish Cream or Jamison's Irish Whisky - now that's the way to start any party. 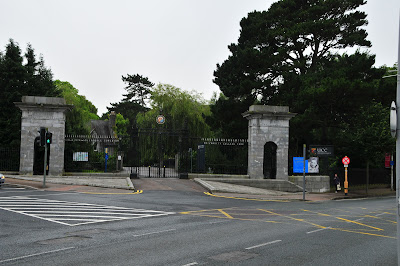 Directly opposite is the University of Cork standing in magical grounds, along with 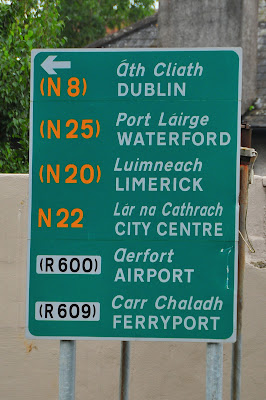 bus routes and main roads to all parts of the Emerald Isle. 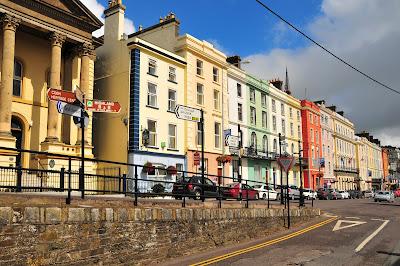 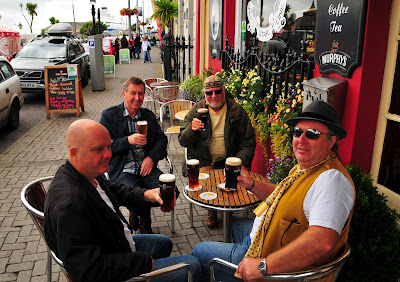 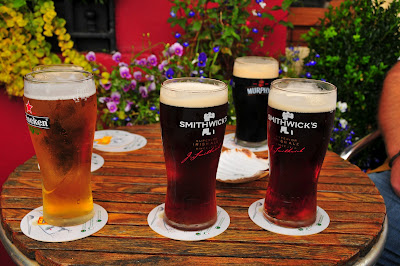 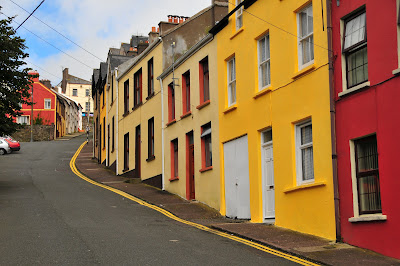 just before describing my last couple of hours in Ireland. With Ian gone at noon on Sunday and the others already departed I was left struggling with the 'photoless Blog' and a taxi booked for 13:00. Ideally, it would have been fantastic to have visited another of my all time GUITAR HEROES, but time was pressing and the car was awaiting. Telling the driver of my missed opportunity he announced "we'll soon put that to rights" while executing a U-turn. 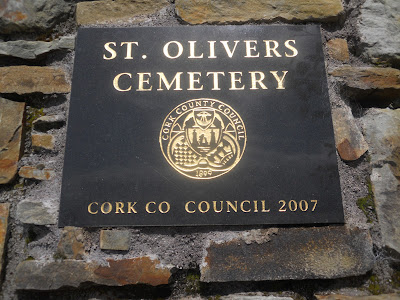 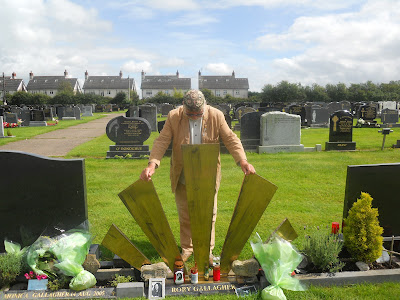 I was soon paying my respects to the man who Jimi Hendrix himself, in answer to the question "how does it feel to be the Best Guitarist in the World" 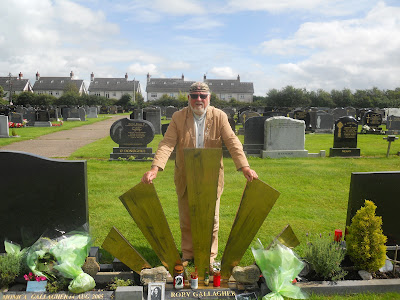 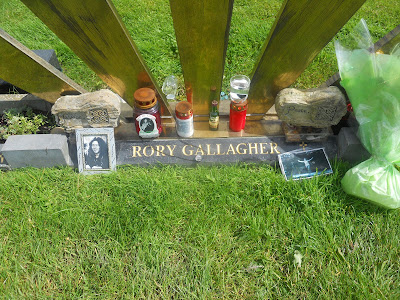 RORY GALLAGHER"! My trip had certainly been EDGED IN BLUE take a listen to a genius at work. If that were not enough of a finale, stepping off the train in Weymouth there stood 2 beautiful Ladies from the Orient, 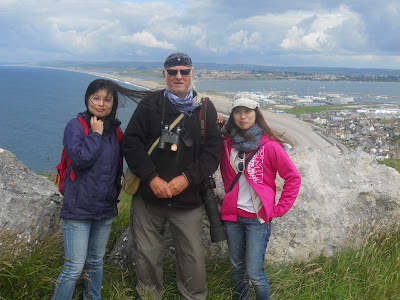 none other than SYENNY (Shenny) LEE from Taiwan and WEI GE from China, who I had befriended a few weeks ago. Strangely we had exchanged e-Mails just a few days ago to arrange a day out before each of them return to their respective countries. 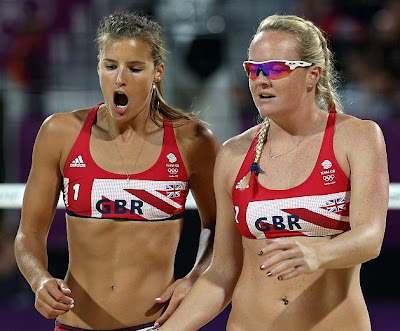 and what with the whirl of the Olympics and Ireland I almost forgot about Team GB's Women's Beach Volleyball players. Great Britain women's pair Zara Dampney and Shauna Mullin came from a set down to beat Canada in their opening Olympic match at Horse Guards Parade. Dampney and Mullin lost the first set 21-17 but claimed the next two sets 21-14 and 15-13 to win their Group F tie.OK, no medal but we have to remember the massive effort that goes to just becoming an Olympian, and I doubt we have seen the last of these 2 fine athletes!

What about this for Great Britain's future warship? At a glance not a lot different to my first ship in the Royal Navy
http://www.bbc.co.uk/news/uk-19312378 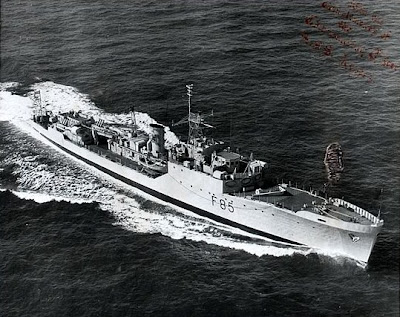