My Father Was The Captain of the Eddystone Light, Encountered a Mermaid One Fine Night. Yo Ho Ho Let the Wind Blow Free, Oh For the Life on the Rolling Sea!

It would be foolish to even attempt a commentary on Team GB medal success but what I would like to do, on an occasional basis, is simply highlight the happenings and events that turn me on! 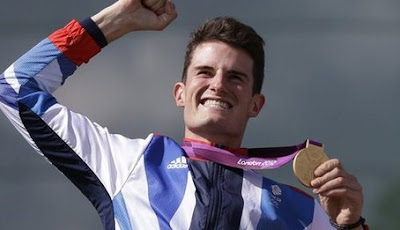 Peter Robert Russell Wilson Double Trap Sport Shooter  Gold Medallist
is from Dorchester, Dorset not more than 7 miles from my home, so to all intents and purposes a 'neighbour'. What a performance he put in yesterday. 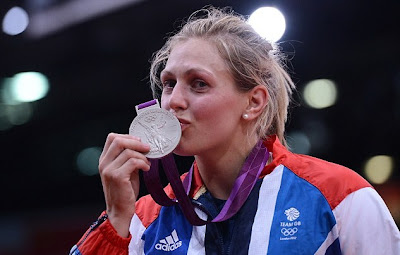 However, without trying to outshine Peter's efforts, it is rare to see the TOTAL sportswomanship combined with passion and emotion as was my privilege to watch on the Idiot's Lantern late yesterday afternoon. Silver medallist Gemma Jeanette Gibbons had overcome the odds to get to the semi-final and face the World Champion who she defeated in extra time. Broken by pure emotion she not only had the time to salute her French opponent but later looked to the heavens and mouthed the words "thank you Mum". Magnanimous in defeat, against a better player on the day, she stood proud on the rostrum to receive a silver medal which looked every bit like a GOLD to me. I'm going to nickname her Midas!!!! 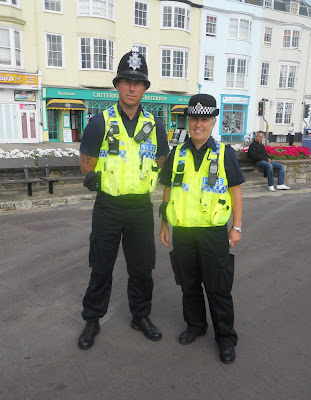 and taking time to thank the POLICE for keeping us all safe during this fantastic moment in history. These 2 Officers had been drafted in from Bournemouth and were also very much enjoying their day. Next it was down to Weymouth Harbourside to look for the yacht Collective Spirit as reported on yesterday's post. This was the second search with the same outcome, I simply couldn't find it......but tomorrow I am not coming home until I have found her and touched Jimi's Guitar!! The town, a little devoid of people thus far, seemed to be topping up and that was also true of the harbour. 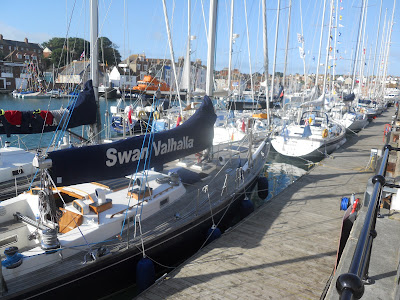 We come from the land of the ice and snow,
From the midnight sun where the hot springs flow.
Hammer of the Gods will drive our ships to new lands,
To fight the horde, singing and crying: Valhalla, I am coming!
while  We skipped a light 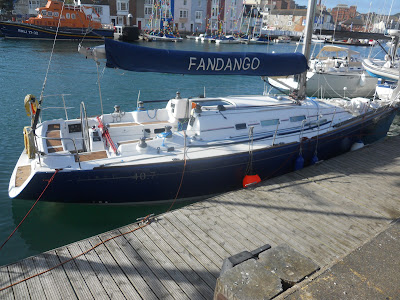 Turned cartwheels 'cross the floor. I was feeling kind of seasick,
But the crowd called out for more. The room was humming harder,
As the ceiling flew away. When we called out for another drink,
The waiter brought a tray. And so it was later,
As the miller told his tale, That her face at first just ghostly,
Turned a Whiter Shade of Pale. 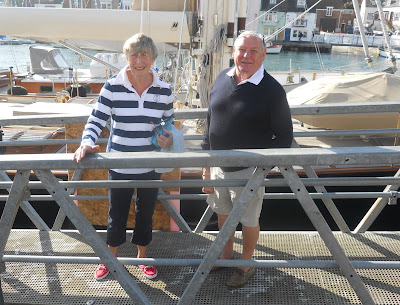 Stopping for a brief chat with The Captain of the GALLIANO and his lovely Lady, I then moved on to find 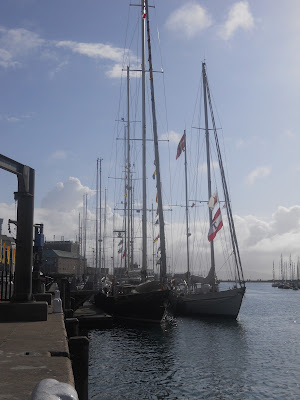 a real Ocean Greyhound in the Bristol registered VELACARINA (inboard with mast to high to get in shot). 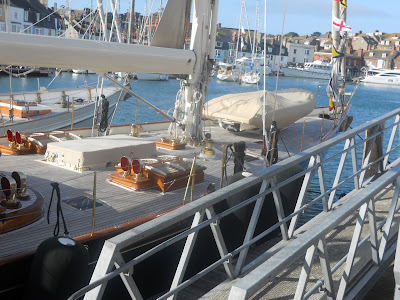 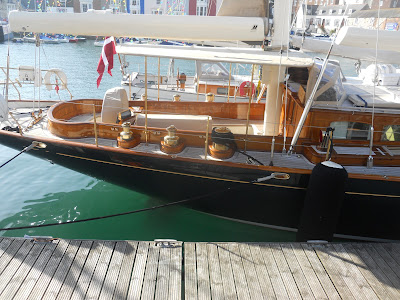 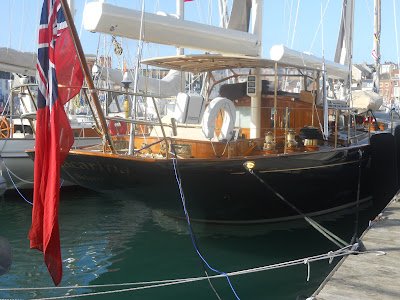 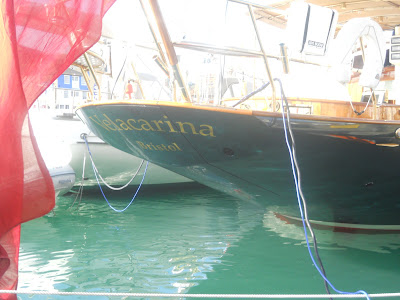 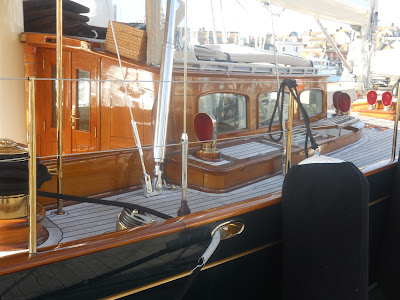 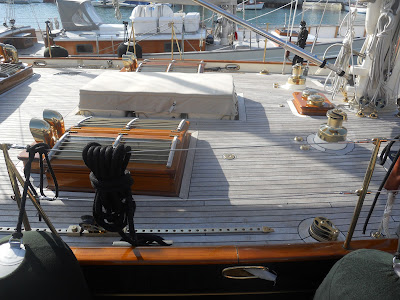 Beautifully fitted out, I just stood there agog looking at all that 'brightwork' (brass) a Matelot's Dream. Wishing I had brought along my can of 'Bluebell' (metal polish) I would have happily ripped the sleeve from my shirt and worn my fingers to the bone. Further along there was the sad sight of a 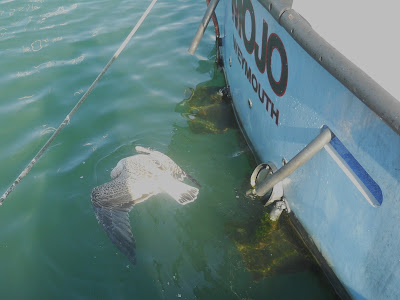 dead Gull in the sea. 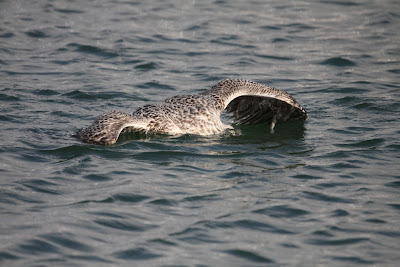 but just a minute, signs of life 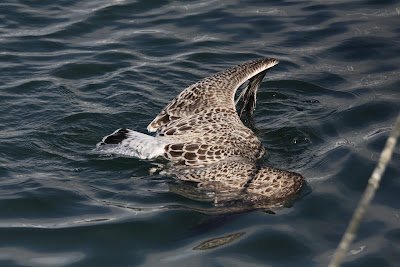 as it struggled to lift its head above the surface, Time for swift action and luckily finding an old broomstick among the wealth of fishing gear on the catamarans, I was able to get it alongside and onto the jetty. 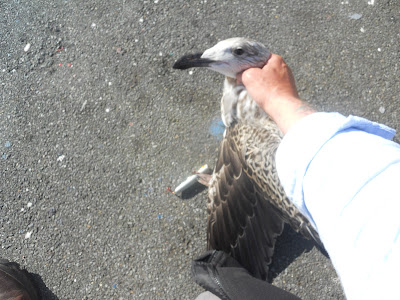 The result of carelessly discarded fishing tackle, it had a triple hook embedded in one foot while a bight of nylon line was caught around its neck. 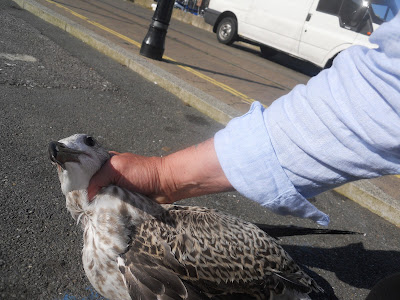 The more it fought to raise its head the tighter the line become, which also took a fair bit of untangling. 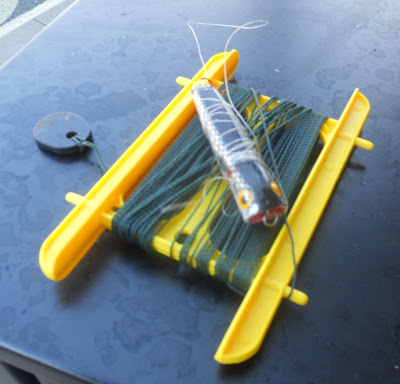 Freed from the 'spinner' and 'handline' 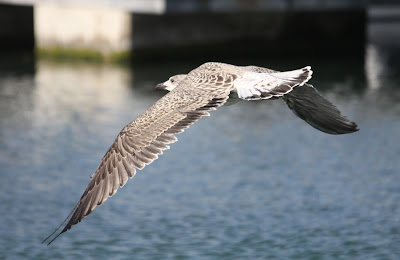 it happily flew off down harbour. It is my prediction that it will be the same bird that drops a little 'thank you present' on my head tomorrow. 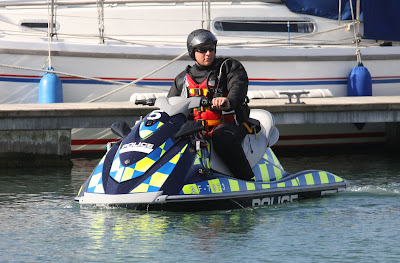 All of this was being watched by one of the Police Water Jet Patrols before I headed for Portland Bill. 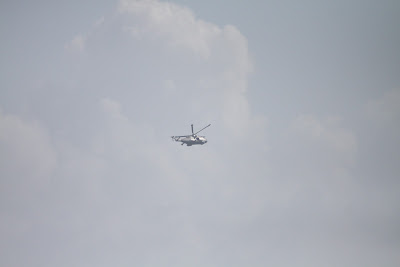 There I was met by one of the 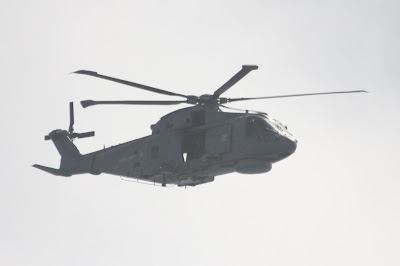 Helicopter Flight from HMS Bulwark guarding us all against intruders, 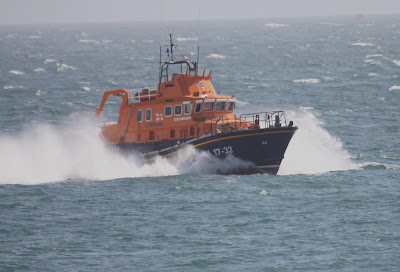 while there was also the most impressive sight of the 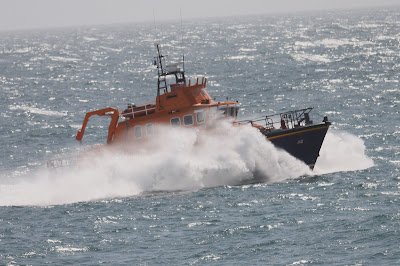 WEYMOUTH LIFEBOAT out on 'showing the flag' duties.

A hour or so with The Secret Lemonade Drinker, sat astride a bollard and spinning sea stories brought my day to an end during which I had met people from California USA, France, Argentina, Switzerland, Cambodia, Poland and Germany - life does get a bit boring doesn't it - Ha, Ha!