It's Only A Hobby! 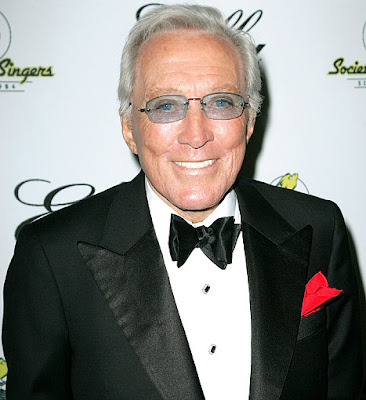 A little late in the day yesterday to drum up any words on the death of (Mega) Andy Williams, and there won't be too many today. Suffice to say, at the soul of every Rocker (Punk, Prog or otherwise) there lies a 'crooner', for me this was he! For a man who certainly CAN he made a great success of saying CAN'T and in so doing bringing me a great deal of pleasure. "Can't Get Used to Losing You" 1963 was a fantastic start but when in '67 he recorded "Can't Take My Eyes Off of You" he surely surpassed that? Never say never, but it is highly unlikely you'll ever hear me say again that an artist outshone 'The King' on a particular track, but Williams rendition of "Can't Help Falling In Love" 1969 leaves even Presley standing, is there an end to any other recording that hit so hard below the heart, try it!
C.H.F.I.L. - Andy Williams
OK having put the Kleenex away! 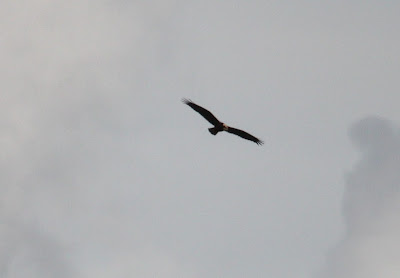 My first run to the airport today so a little driving practise was thought in order mainly as I am not a frequent driver in a basic car let alone a 'state of the art' Range Rover. To the end of the farmyard was thought sufficient but I wasn't ready for the sight of a large raptor flying high above distant fields. Still underway, the bins were deployed and it looked at first glance that the bird either had a yellow bill or carrying something yellow. Neither was true 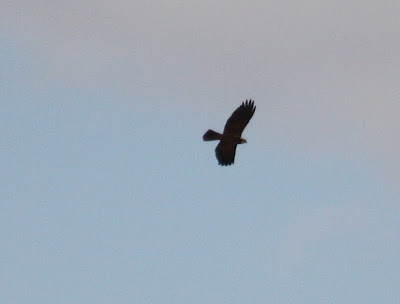 it was its 'crown' that was glowing in the (then) bright sunlight, making it a MARSH HARRIER. In the Parley Court Bird Survey 2007 -08 I simply noted, "uncommon passage migrant, thought likely to occur" as none of the family or work-force recalled ever seeing one, that has now been rectified! 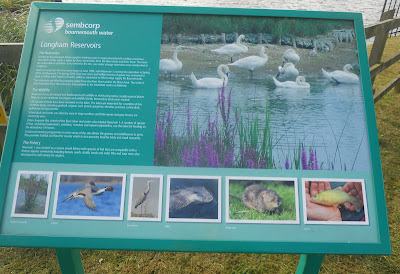 My duties completed, for now at least, it was off to LONGHAM LAKES for a couple of hours, just a couple of miles from here, but there sky looked ever threatening and the westerly breeze was forcing more our way. Starting in a westerly direction along the northern path, it quickly became obvious that the number of Robins were not confined to Parley as once again every bush seemed to have a visitor. In all 23 were counted during the wander. 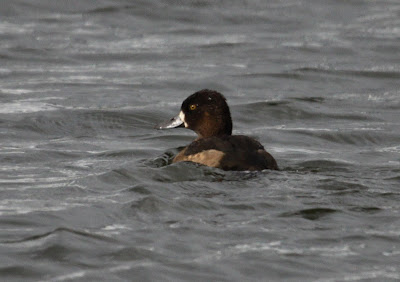 TUFTED DUCK were also numerous, but numbers will definitely increase during the coming months, 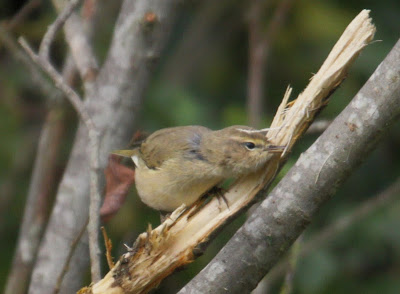 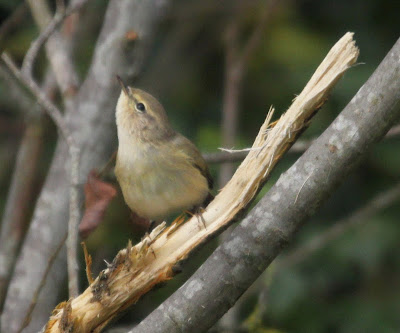 while CHIFFCHAFF (along with just the odd Willow Warbler) where in similar shape. 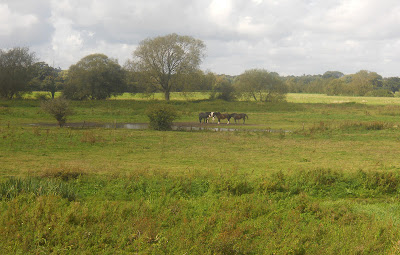 Turning sharp left, I always imagine something good turning up in the western meadows but today the scene was more akin to John Constable or George Stubbs rather than Peter Scott. One or two things caught my eye, with c3 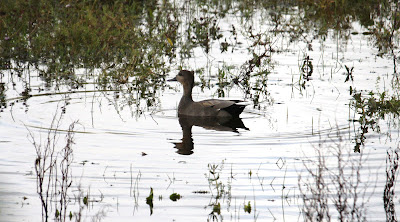 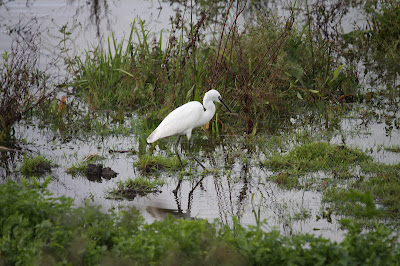 a single LITTLE EGRET and a 'springing' Common Snipe, so fast out of the blocks there was little time to raise the binoculars let alone the camera. 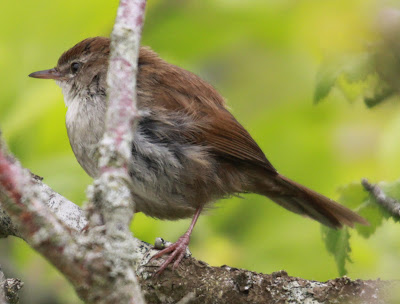 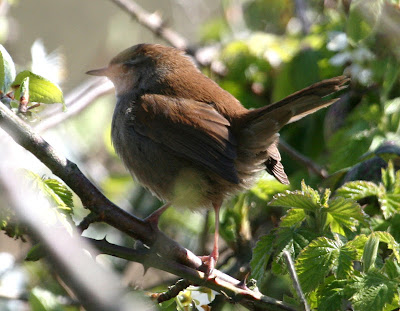 A CETTI'S WARBLER betrayed its presence with one of those familiar 'short but sweet' bursts of song, while a Falcon of sorts was now dashing post haste across the fields. Surely this was going to be a Hobby, reported here in recent days which would be an addition to the Year List, but no even at that distance the bulky profile suggested a 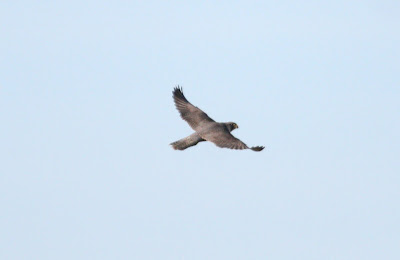 PEREGRINE. Both Green and Great Spotted Woodpeckers fell to the log, and in quick succession many others including Reed Bunting, Swallow, House and Sand Martins, Kestrel, Common Buzzard plus an early adult Common Gull. I had now reached the south west corner of the water-course, where some way off and high, but heading my way was this Swift shaped bird 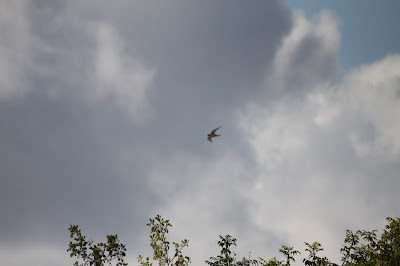 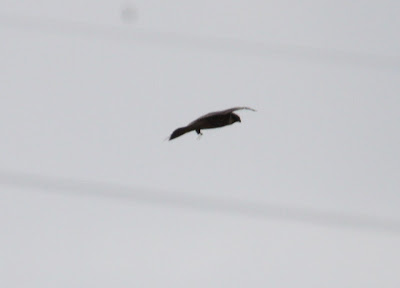 Already identified as a HOBBY, it deftly picked off a Dragonfly also on the wing 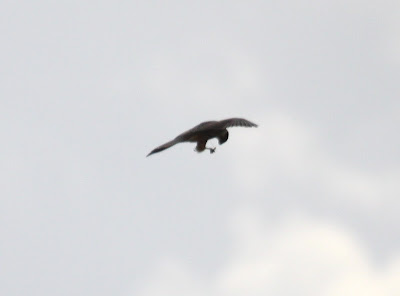 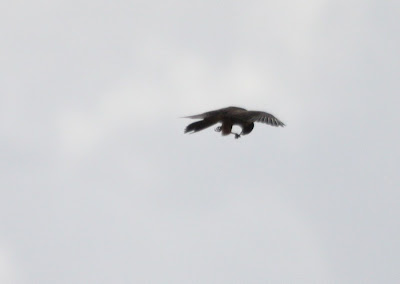 which it dispatched and devoured without missing a wing beat 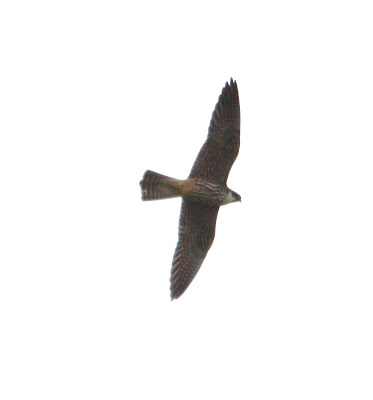 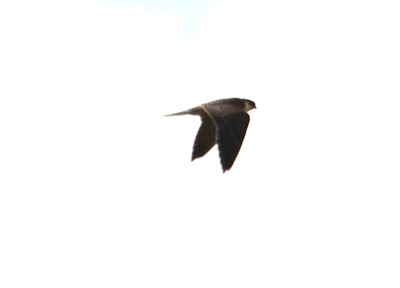 It did get fairly close but not for long, but lingered distantly allowing prolonged viewing. Trivia:- The table football game Subuteo linked 'birdwatchers' with 'football fans' when its inventor Peter Adolf  (1916 -1994) was not granted a 'trademark' to call the name Hobby, so opted for the next best thing the Latin name for the bird which is Falco subuteo! 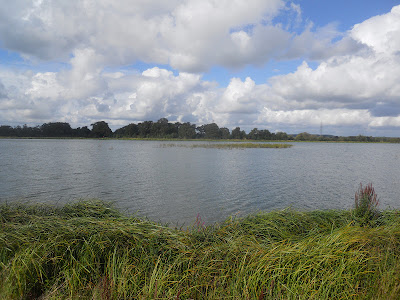 I had been fairly lucky with the weather so far, only having one light dousing, but looking back from whence I had come it looked as though much more was on its way (don't let the 'blue' fool you) so headed for the car park. 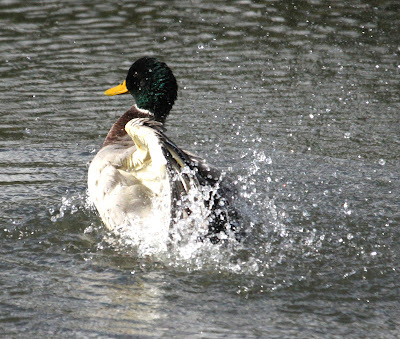 On the way back this male MALLARD didn't have the same concerns, 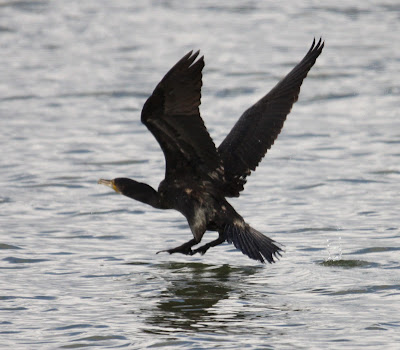 and nor did this CORMORANT as it came in to land. 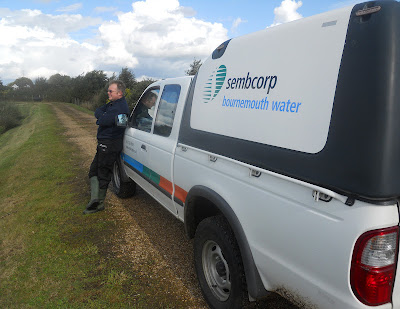 My final 'find' of the day was catching up once again with IAN HAYWARD the local Water Bailiff who has become quite well known to me during the relatively short time I have been visiting this site. Good to see you again Ian!
Posted by Bagsy at 17:43