An extremely pleasant and pleasurable start to what has been another day of sorting things out for the impending trip. Overcast and chilly again, I did have a wander through the cemetery where things were quiet to say the least, before arriving at my friend Pat Shearing's new home for breakfast. 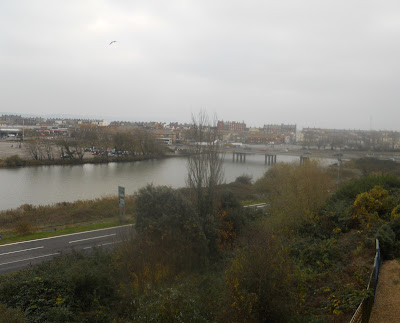 Something I rarely do for myself is cook breakfast so the food alone was something of a treat, let alone a couple of hours of convivial chatter 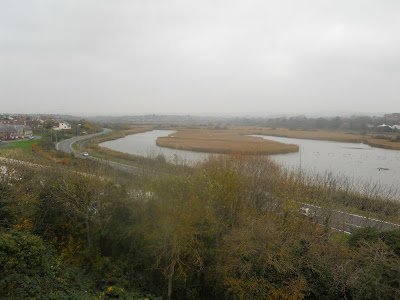 while taking in the view from her flat which covers the full extent of Radipole Lake. Thanks for that Pat! There followed a walk around the reserve where c4 Great Spotted Woodpeckers were seen or heard, a Chiffcaff, a Common Snipe, a few Goldcrest and views of the 'big 3' Cetti's Warbler, Water Rail and Bearded Tit. Otherwise, it was the back end of the day when Secret and I visited Maiden Castle to the tune of about 150 Golden Plover. Outside of that, it's a return to last night when flicking through the TV channels 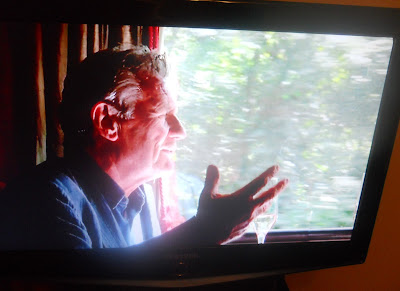 I came across Michael Palin boarding a train in Brazil 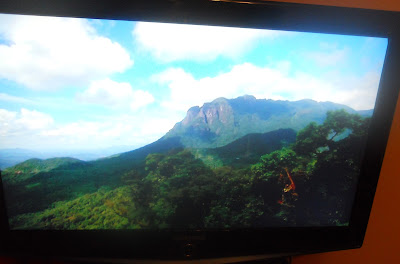 and travelling through what is some of the only Atlantic Rain Forest left in the world. 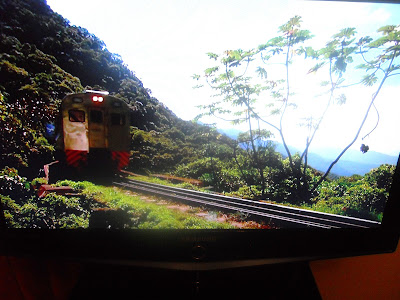 These 3 shots being from the tele last night.
This certainly struck a note with me as Mike Hughes and I had embarked on exactly the same journey some years ago. 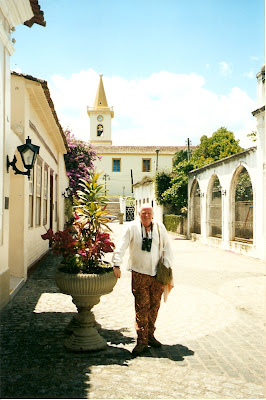 Like Palin we had journeyed from Sao Paulo, the 9th largest city in the world, to the small town of CURITIBA where we booked 2 x 1st Class tickets before nightfall then went for a pint. An early departure next morning saw us in a whole compartment to ourselves up until the very final second 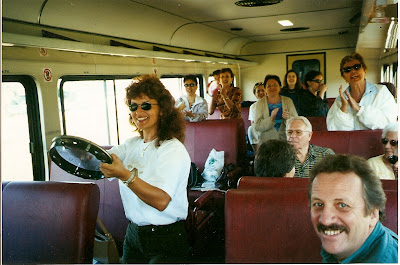 when this group of ladies arrived shaking tambourines, playing maracas and all other types of instruments. This was most certainly 'game on' as the young train conductor took to the microphone, welcomed us all aboard and gave a short talk on what we could expect to see. The ladies? Well, they were a group of workers from another small town to the north on a works outing, and like us were hell bent on a bit of fun! 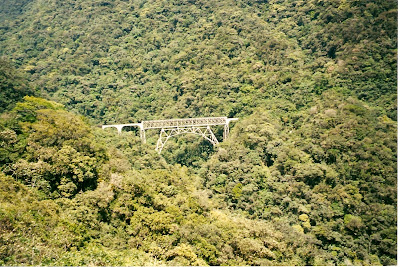 The scenery was absolutely stunning 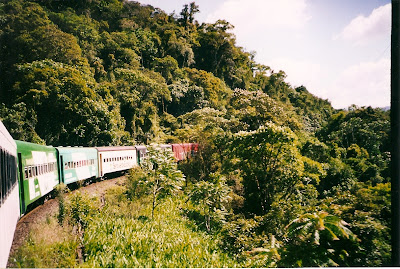 with the scary bit being this train lent out over a number of the precipices further than any other in the world. At certain point you felt as though you could easily fall through the window. 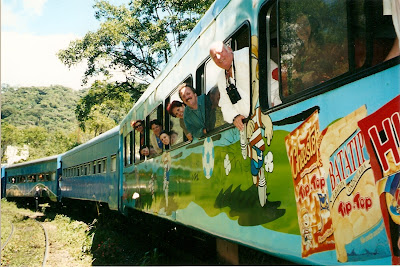 Next, the conductor got out the beer, which unbeknown to us was included in the price, and on such occasions you don't want to fly in the face of local traditions - hic! 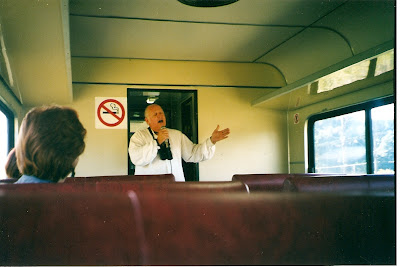 By now the 'sing song' was in full swing strongly featuring Beatles classics and the girls giving us a few Brazilian songs. 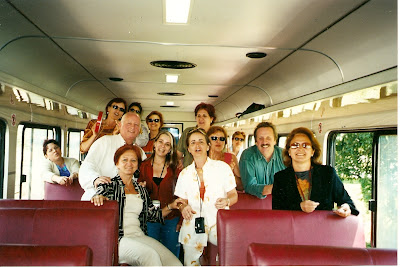 Our destination should have been the coastal town of Paranagua, but heavy rain and landslips was to prevent us going any further than 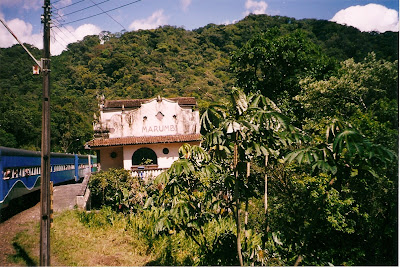 MARUMBI where we got a warm and novel welcome at one of the local restaurants. 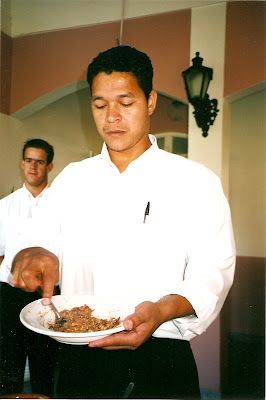 Not surprisingly, a number of the dishes contained Corned Beef with the waiters 'party piece' being to mix the meat with maize 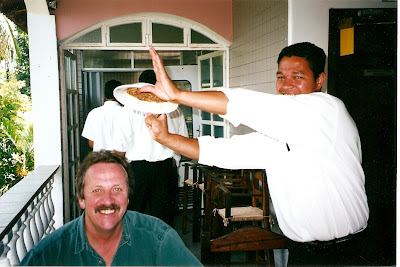 then make as though they were pouring it onto your head. So dense was the mix that it stuck to the plate. 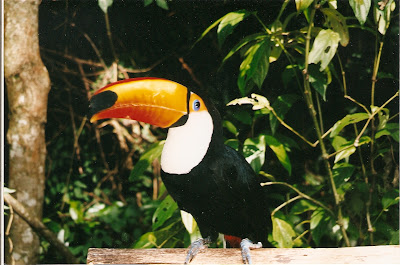 During this al fresco lunch, TOCO TOUCANs along with a number of other species of bird would perch on the handrail hoping for a snack. 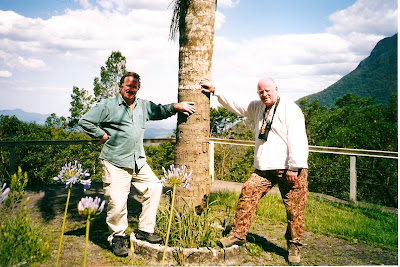 There was plenty of time for more bird watching, sight-seeing and a photo shoot or two, 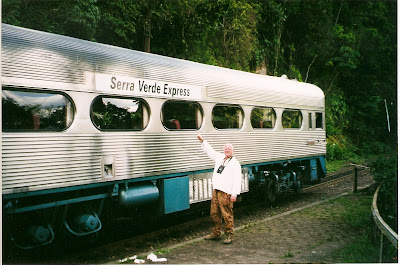 before boarding the far more modern SERRA VERDE EXPRESS back. Unfortunately, the only mammals we saw that day were 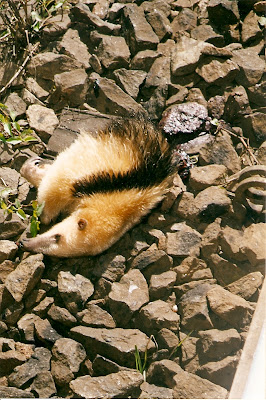 3 of these beautiful ANTEATER types dead on the track. A DAY TO REMEMBER!
Posted by Bagsy at 17:59