When in Dorset, I simply 'love' the turn of the month not just for the new 'header photograph' but for the prospect of adding new species to that particular Ongoing Month Bird List. It seems that some Birders have a bit of a phobia about even admitting to keeping lists let alone discussing them but for me 'they' are the icing on the cake, I once had a Birds Seen on TV List! Yesterday started with a potential 8 species, recently recorded in the county, although one of these was a little flaky to say the least, but a plan was laid so best efforts to the fore. The advice, from those who know best, was "get there early" (to get a good seat it was supposed) finding myself in the middle of a Dorset reed-bed at 03:45 under a star filled sky. Even at that unearthly hour the morning was filled with bird song particularly Cetti's Warbler, which were simply everywhere, Water Rail, Coot, Moorhen, Teal etc and even a short 'break' from Pheasant and Tawny Owl. Above all of this my attention was focused on just one British Bird that I had never even heard 'call' let along 'sing' and I had even been studying the sonograms to be ready, even though this is probable the most distinct and easily identifiable refrain of them all. That's when the biggest Black Cloud ever recorded blotted out the firmament and brought with it the first vestiges of the thick fog to come. Getting soaked was considered far preferable to missing this unique occasion and at 05:53 precisely the reward came as a 'low grunting' sound emitted from the reeds. Not exactly what had been expected but the intermittent sounding of 4 longish blasts was the unmistakable BOOM of a 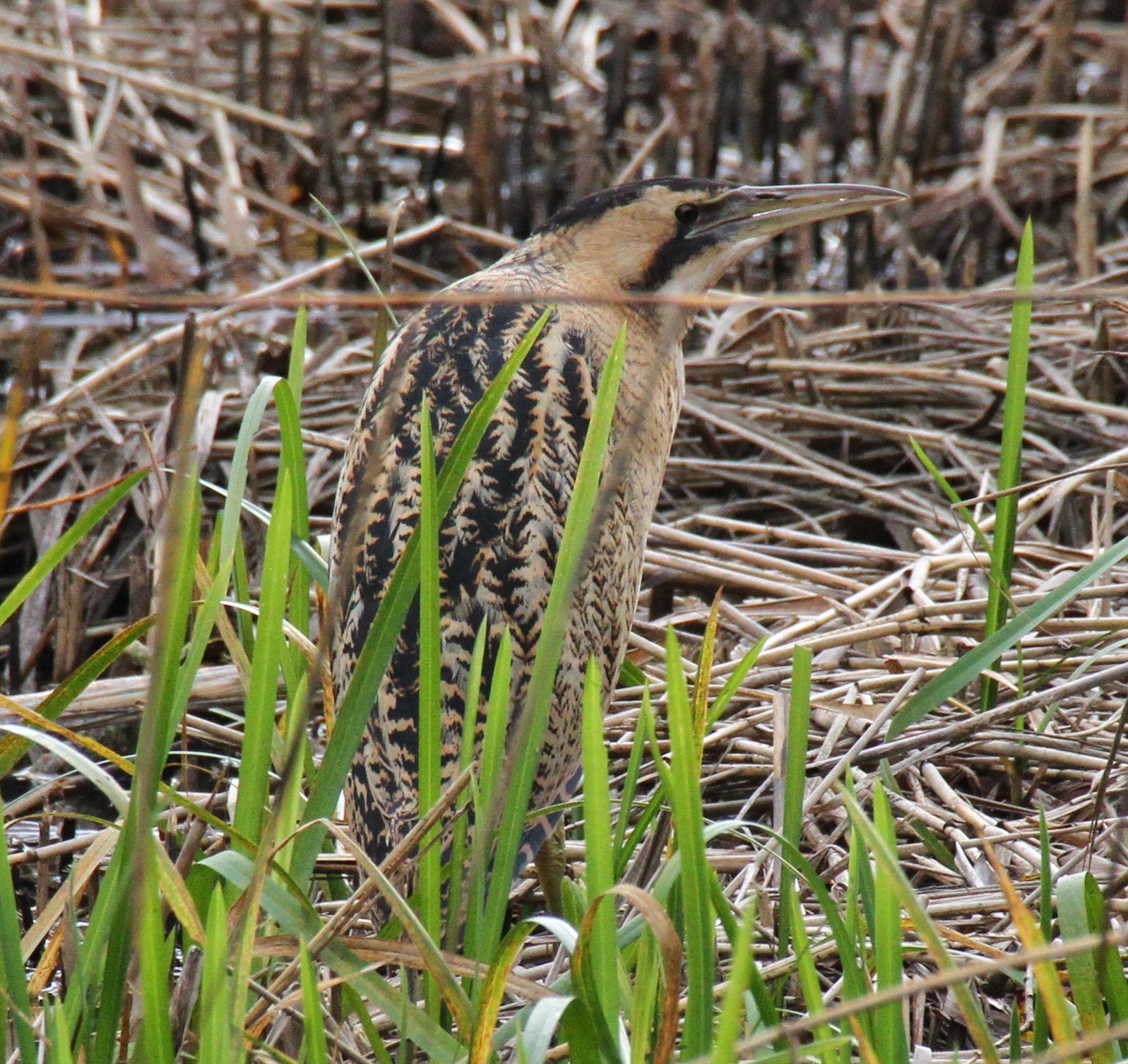 BITTERN
Transfixed, a full half hour was dedicated to taking in this
Music to the Ear
Not simply an addition to a List, but a sound thought never to
be heard on this 'local patch'. A fantastic start to the day.
Similar to this image, due to reduced visibility throughout the day some images on this Post are from the archive and some from Wiki for illustration. Feeling like encompassed in some sort of numb dream, reaching the crest of Greenhill 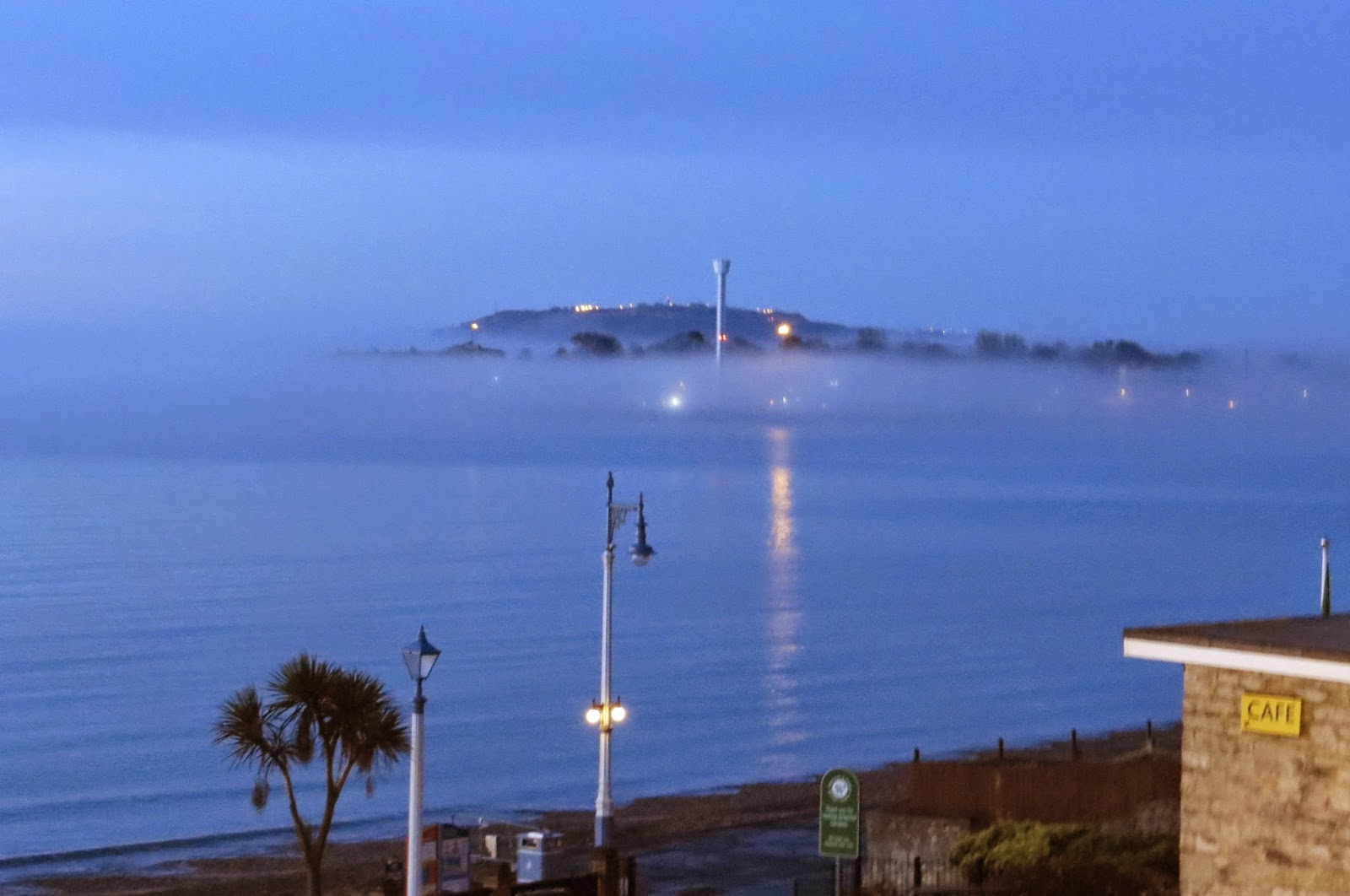 PORTLAND (with the Sea Life Tower before it) also looked to be
fogged in, but at the Harbour, 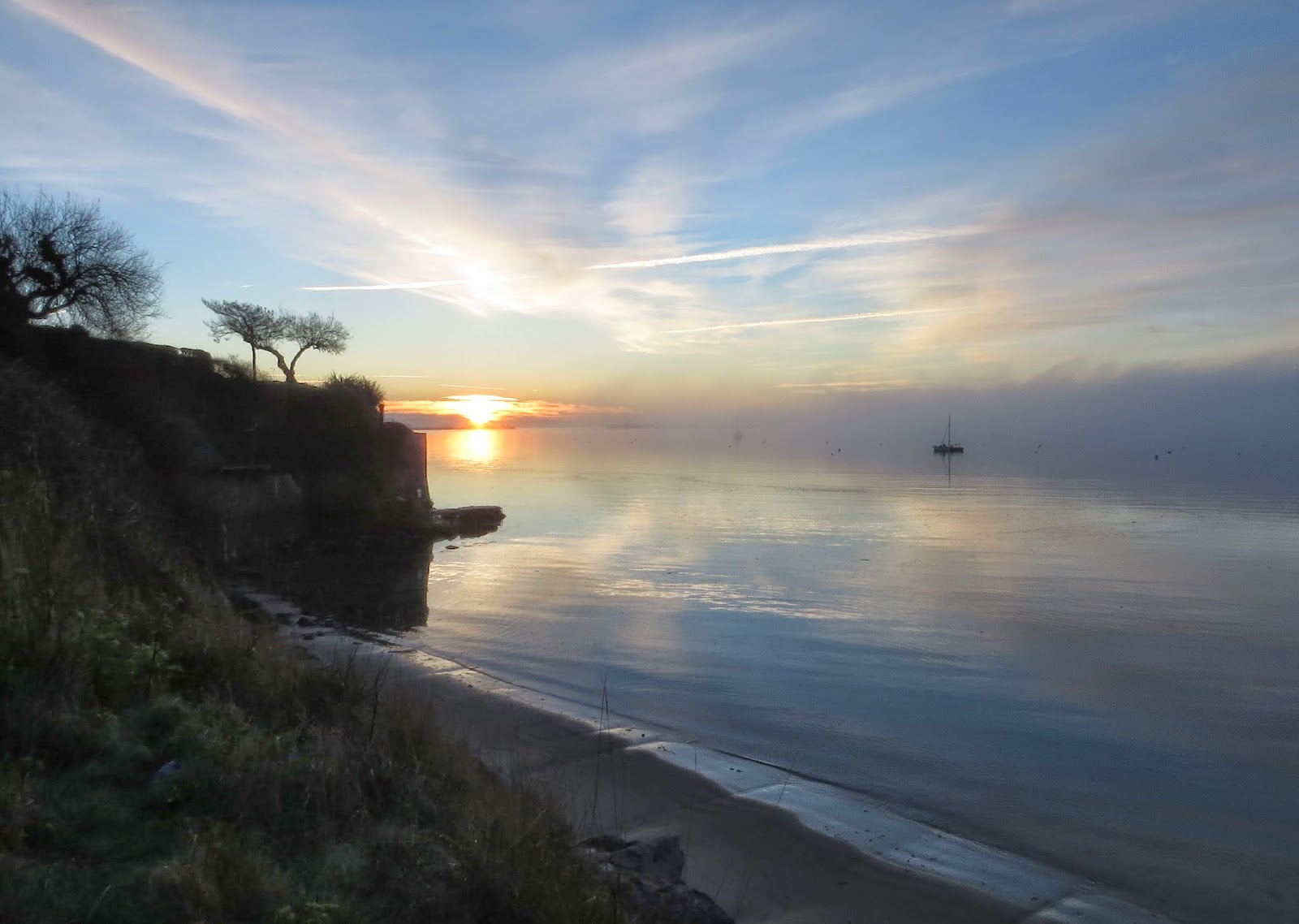 where the lower limb of the Sun was just cutting the top of the
North Arm Breakwater,
the atmosphere was crystal clear and the sea surface calm as the proverbial, perfect for 'scoping.
Among an array of Great Crested Grebe, Mallard, Guillemot, Razorbill and various Gulls
there were at least 10 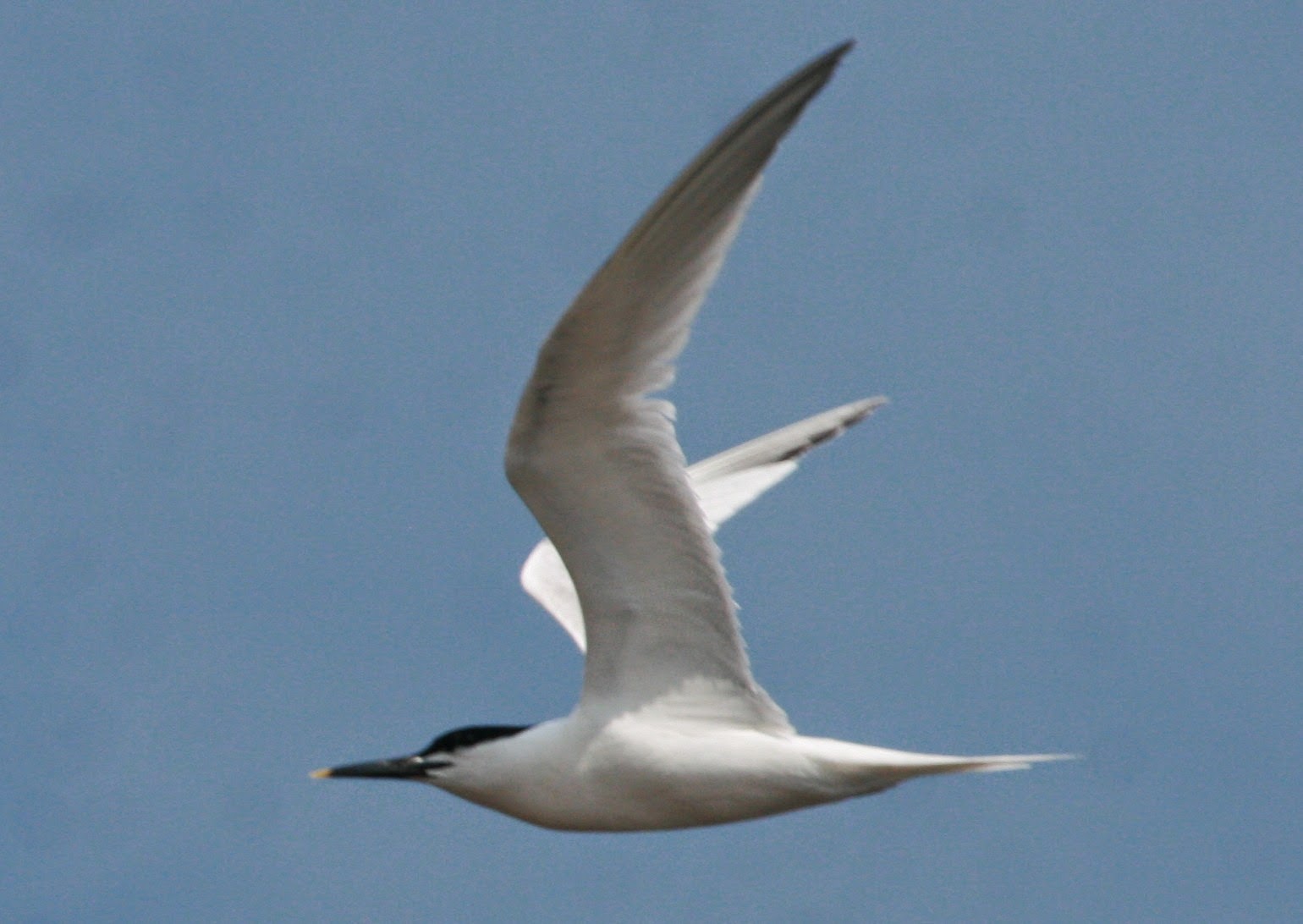 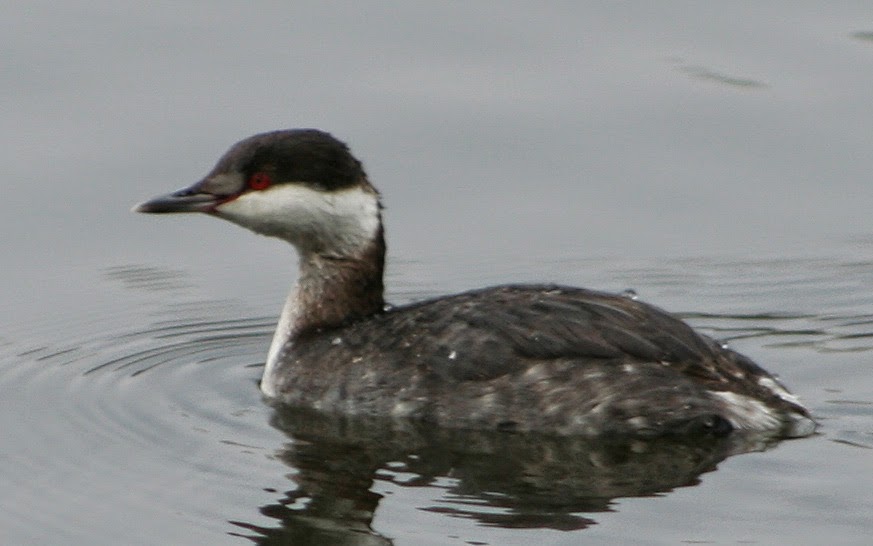 SLAVONIAN GREBE
an April 'first' and second, after the Bittern, of the target birds, 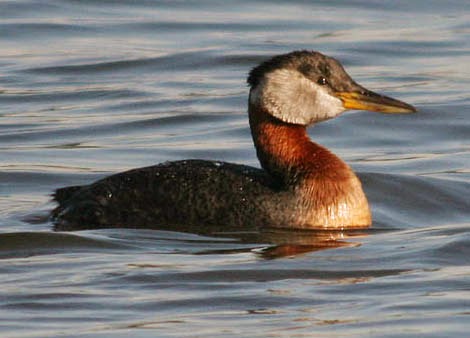 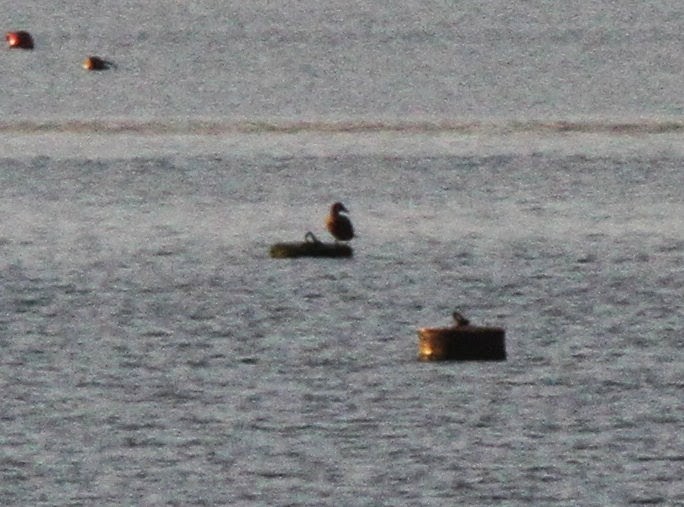 this was a huge bonus on the day, new for the year! At great distance it swam across my field of vision before attacking 2 Herring Gulls, which seem quite content perched on the same buoy, putting them to flight before taking up position for a preen. This is how it will look as it gets older 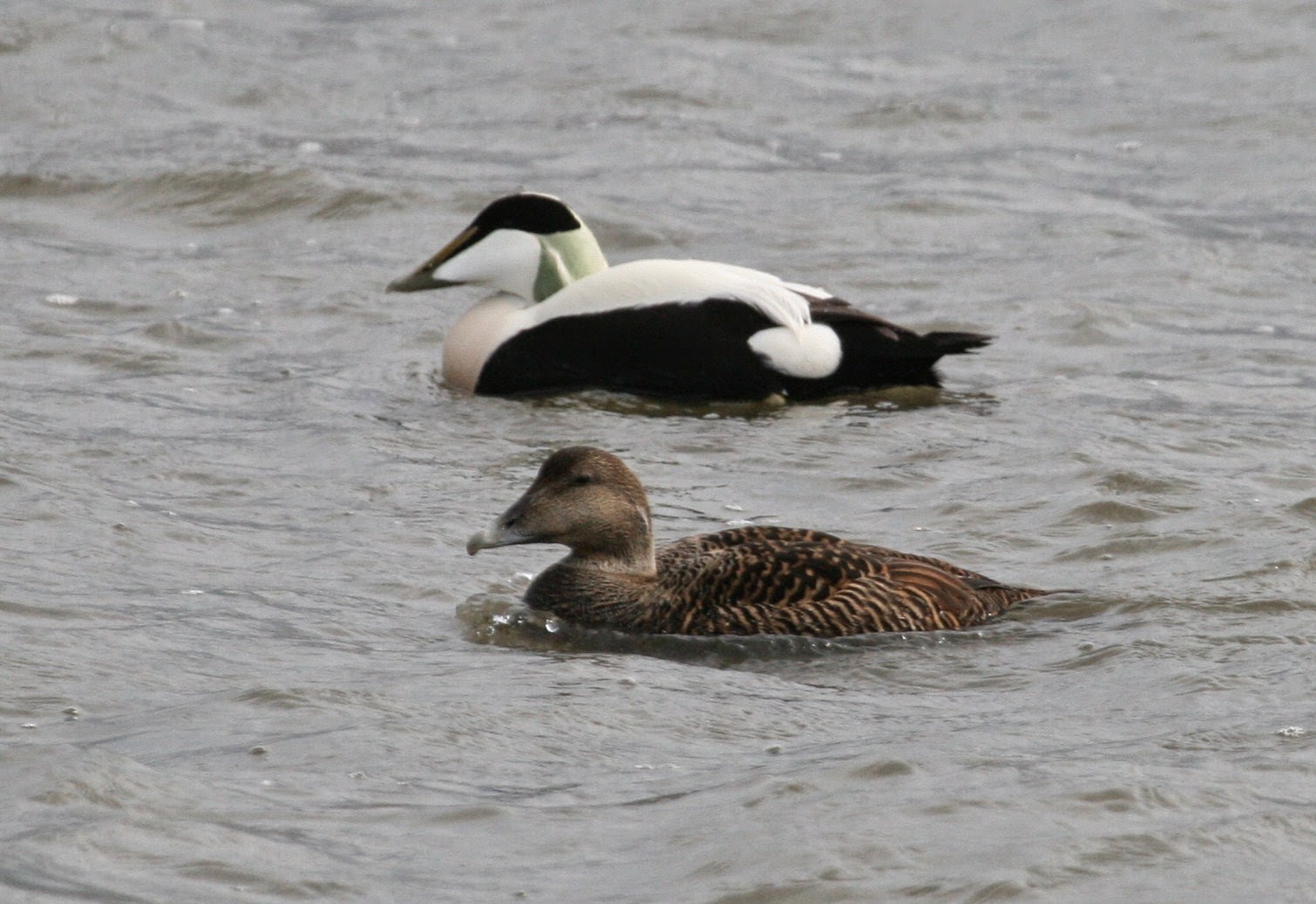 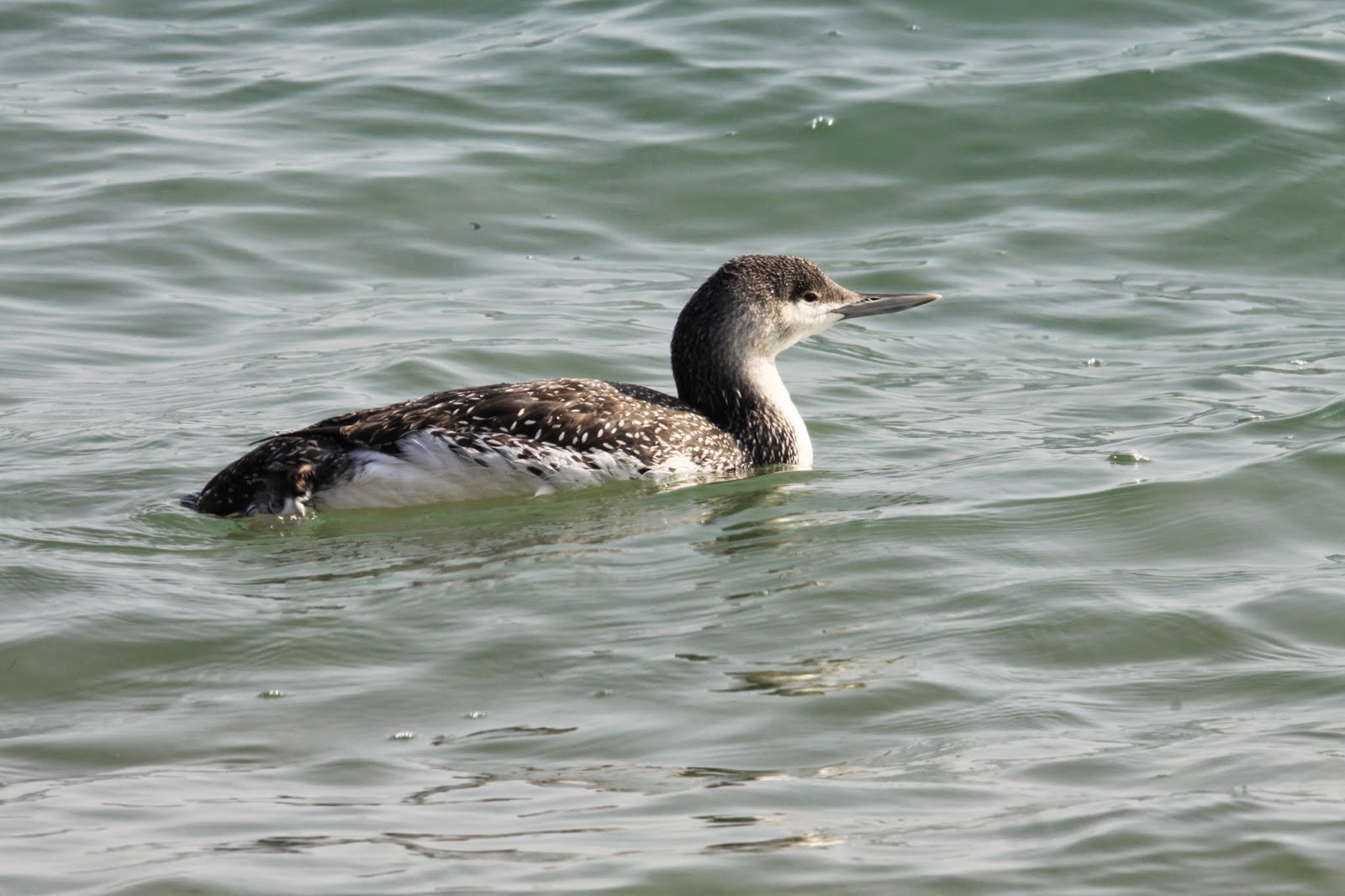 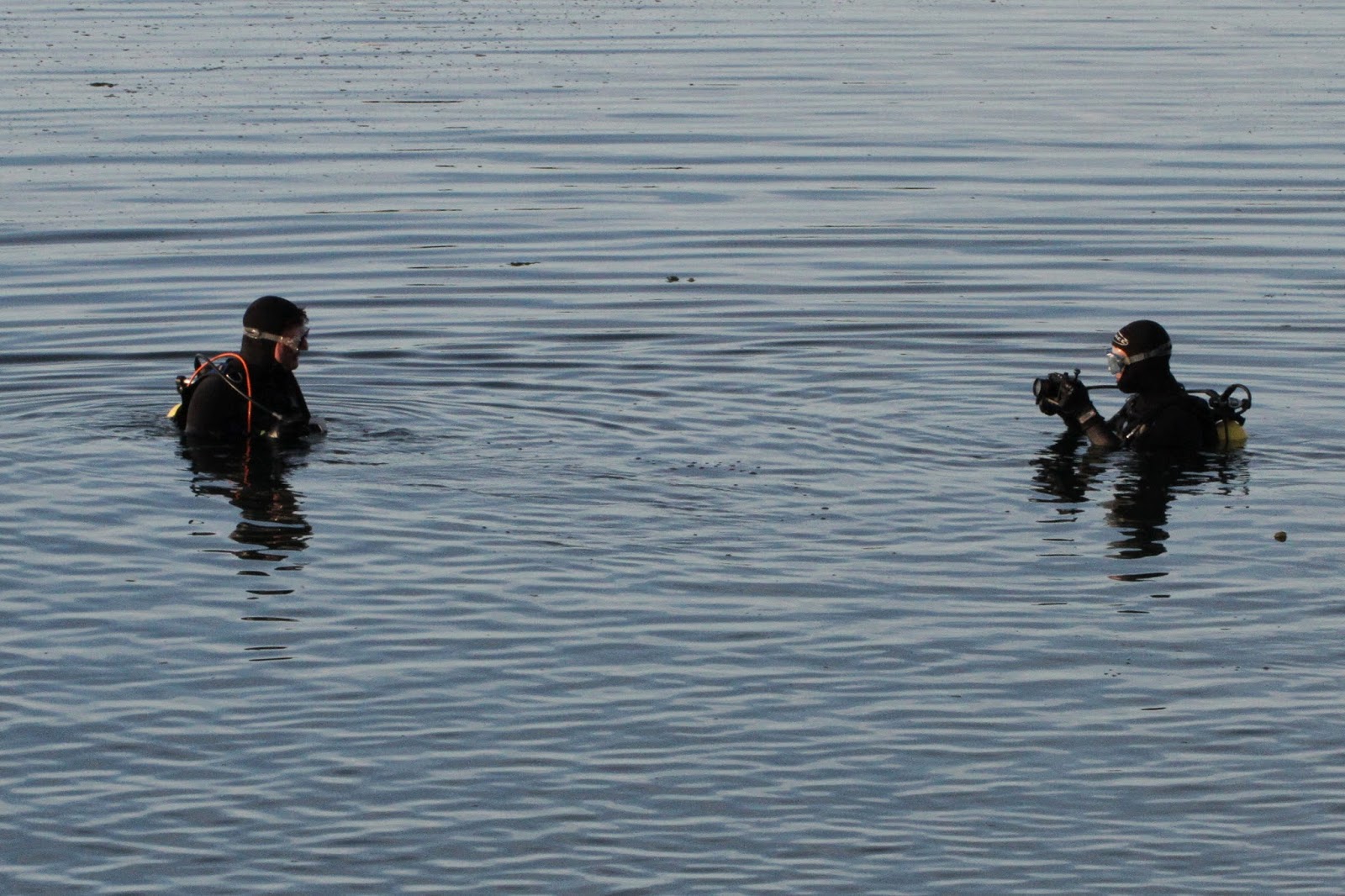 Well, starting the journey back to the east, it was no more than a 15 minute detour to check on the 2 Common Cranes that have been in the area all winter but have not been seen/reported for quite a while now. That's the Flaky bit and coupled with not being able to see the farm gate, let alone the field (slight exaggeration) the mission was abandoned almost before it started.
Next stop 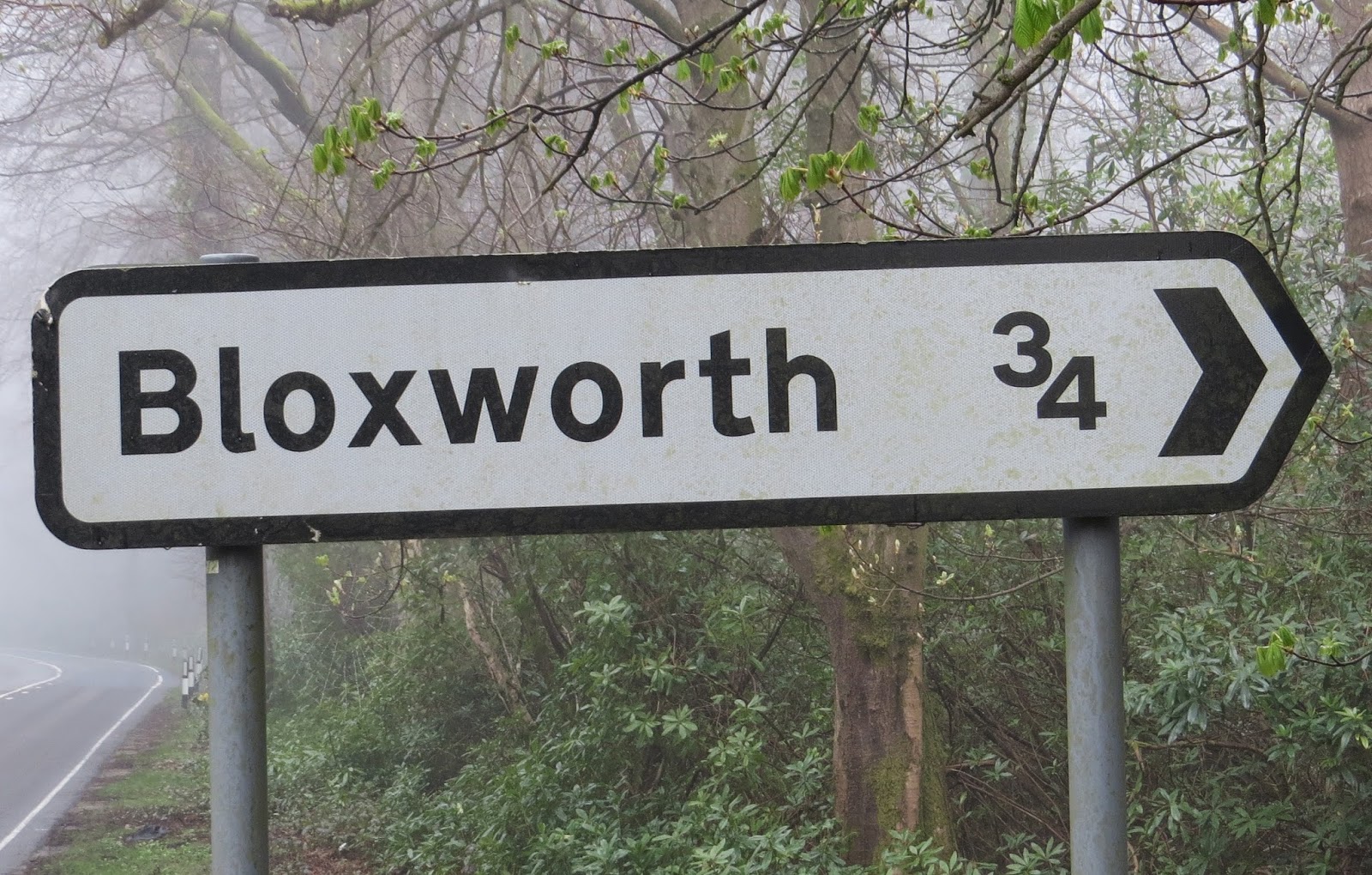 where parking is limited to say the least and followed by the
crossing of a busy A35 road. 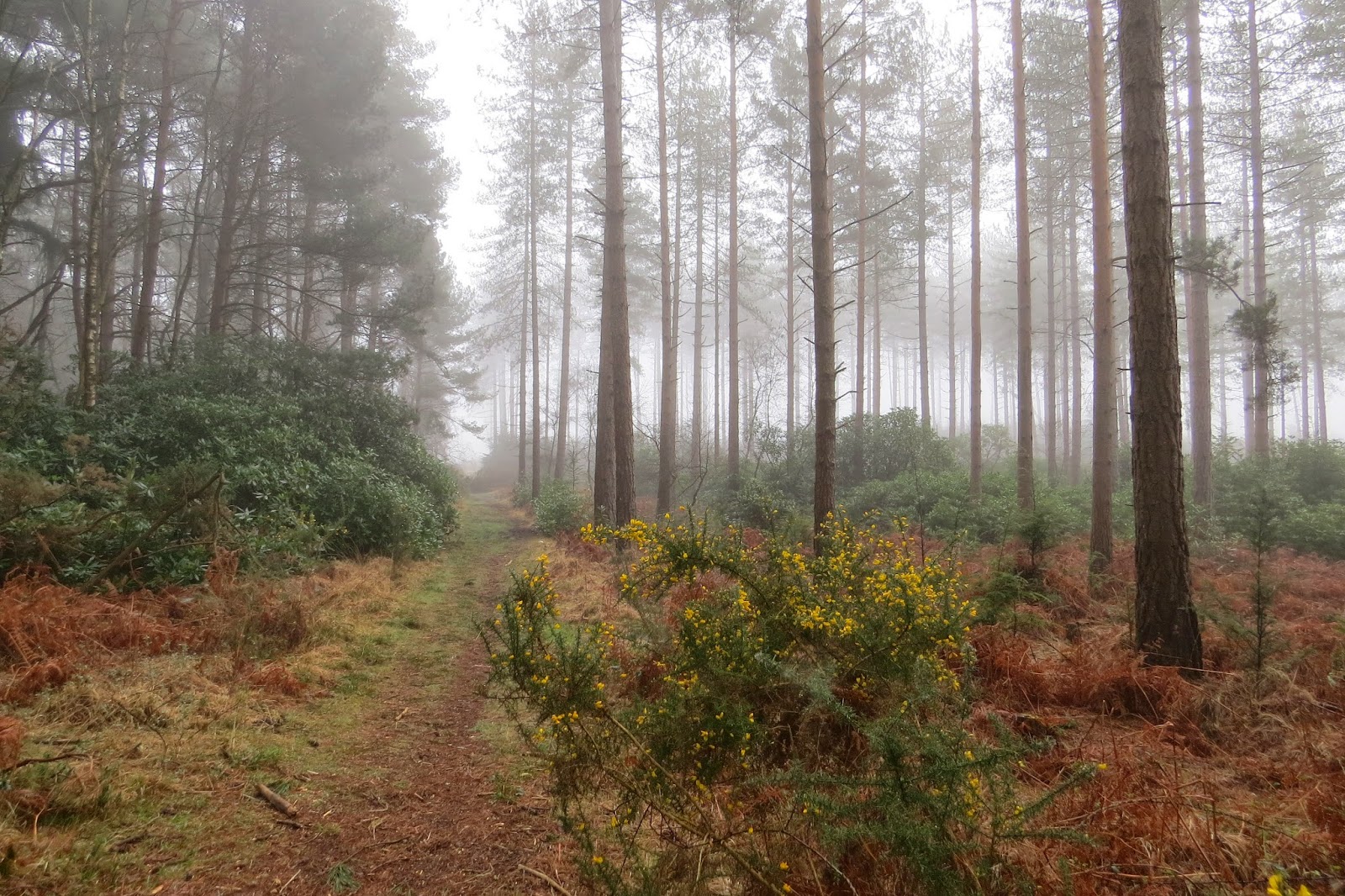 The fact that the fog was still hanging heavy didn't really encourage
matters, which on the strength of that it was decided just to take binoculars.
At the beautiful OAK HILL this is the scene that met the eye! 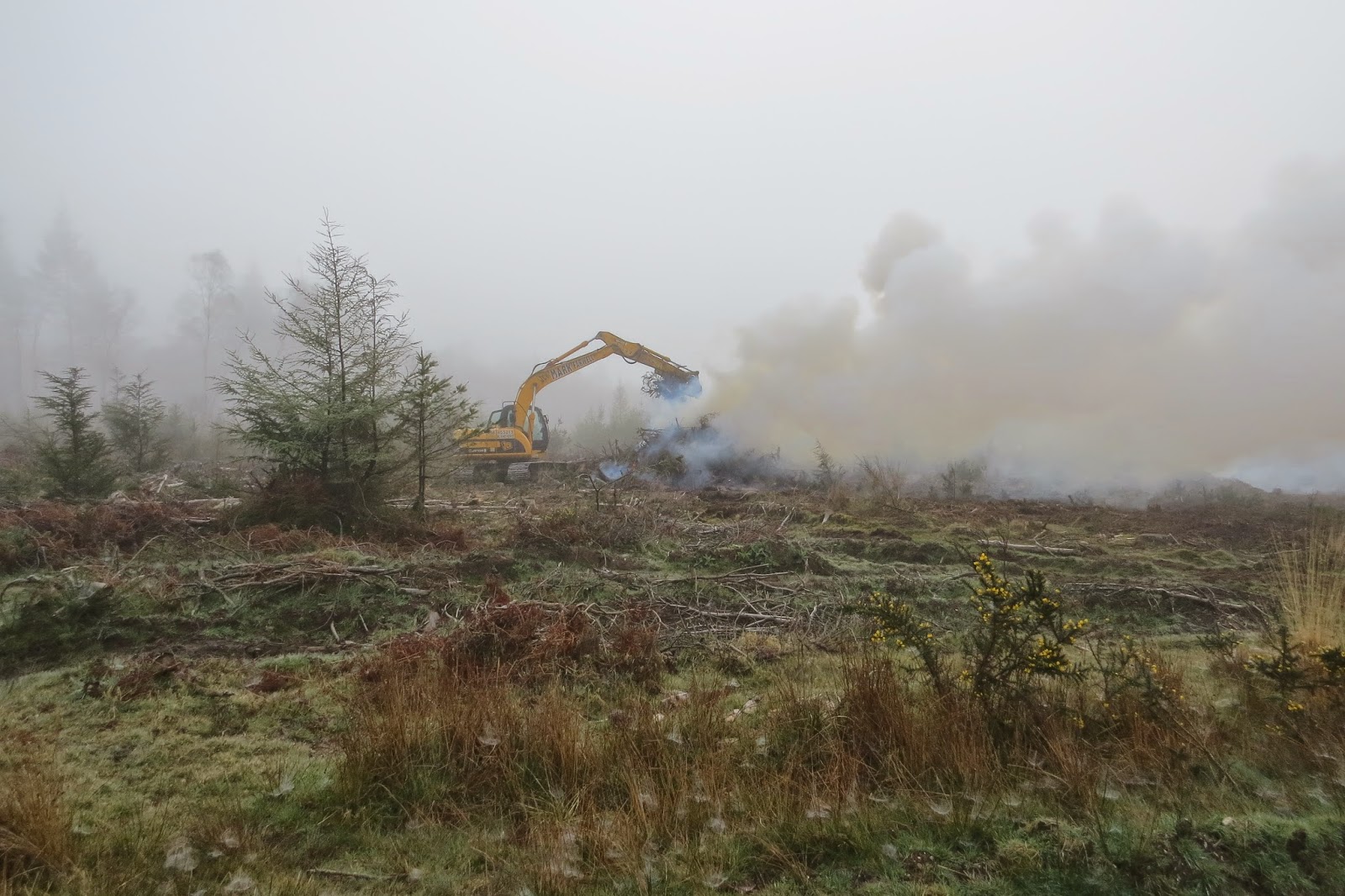 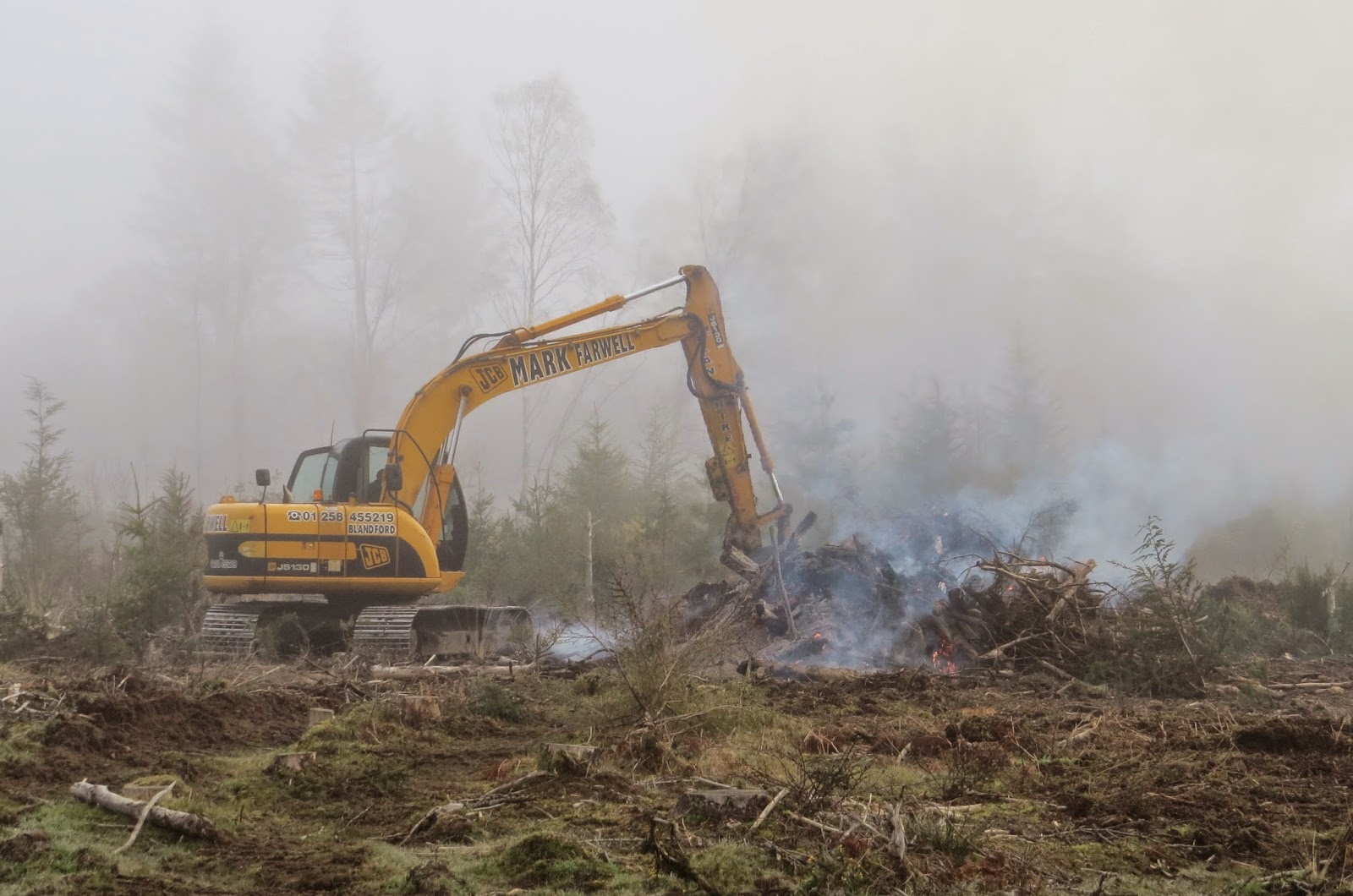 Sweet smell of a great sorrow lies over the land
Plumes of smoke rise and merge into the leaden sky:
A man lies and dreams of green fields and rivers,
But awakes to a morning with no reason for waking
He's haunted by the memory of a lost paradise
In his youth or a dream, he can't be precise
He's chained forever to a world that's departed
It's not enough, it's not enough
Some solace was found in the fact that this is in fact a Plantation for the production of Timber and sooner or later this clearing for the next crop was inevitable - why did they pick my f day? It was also of comfort that the singing Woodlarks that greeted me on the last visit do have an alternative to this particular patch as this is an extensive area of Heath and Woodland. Ever onward!
With the cameras in the car, it was thought worth returning and capturing these images for posterity, but that's where the next pitfall was met. Q - How many times have I read Tolkien's Lord of the Rings (Fellowship of the Ring)? A - More times than you've had hot dinners! So why then at the meeting of the tracks was it decided to go a different way thinking it would take less time. Quote:- Frodo Baggins to Peregrine Took (Pippin) who had suggested they visit the Golden Perch “Short cuts make for long delays, but inns make for longer ones". I never listen. A full 30 minutes later the photos were taken and I headed back to the car. The next stop, in the hope of  a tardy Avocet, was the Hide at Middlebere but there 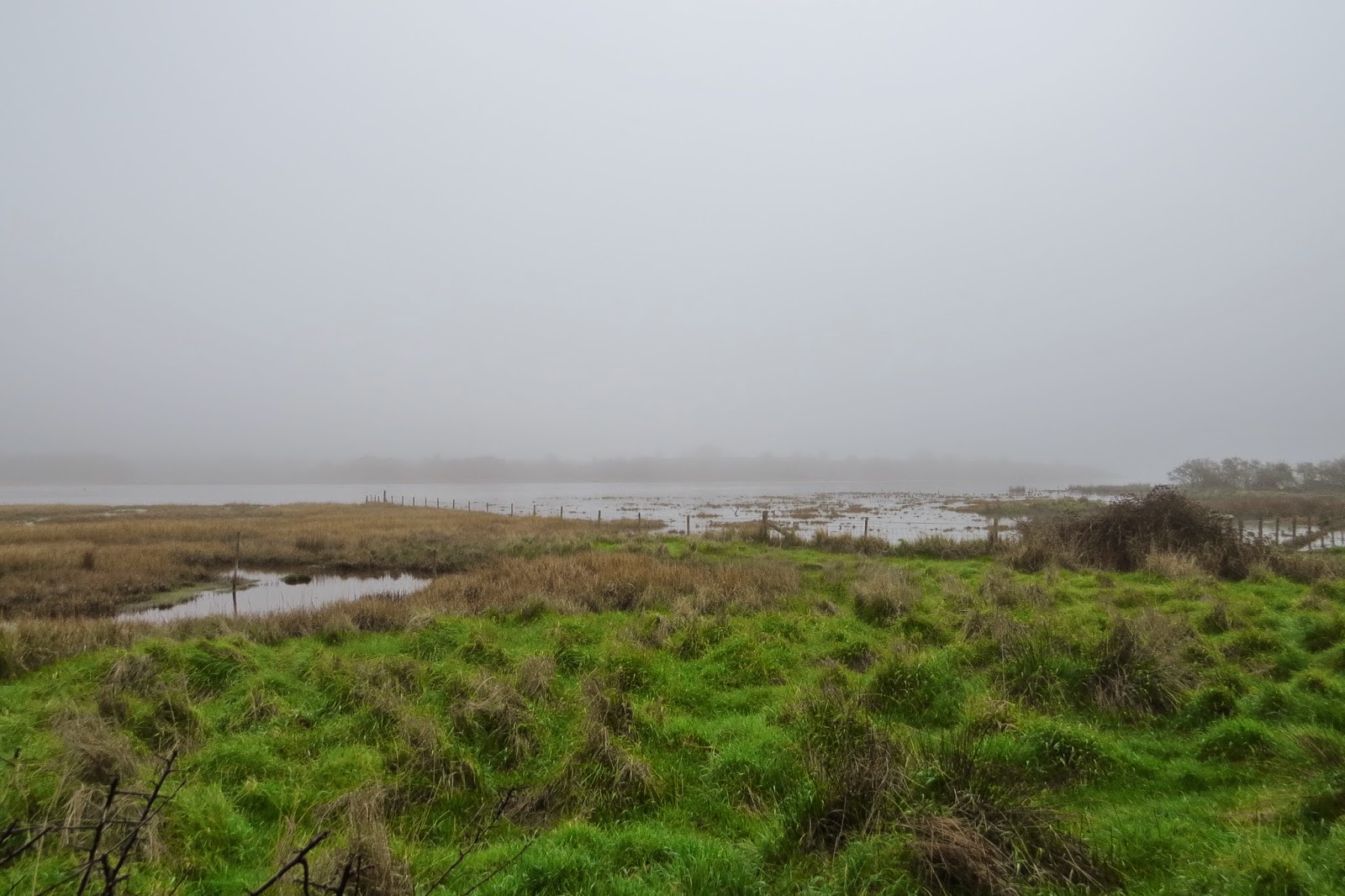 the visibility was little better and the Spring Tide had even flooded
the meadow right of picture, something not witnessed before.
There were 2 other 'birders' there of a similar age who, when asked, reported nothing but 'a FEW'

BLACK-TAILED GODWIT
my estimation 250+ which wouldn't be described as 'a few'.

Taking a seat immediately there were 4 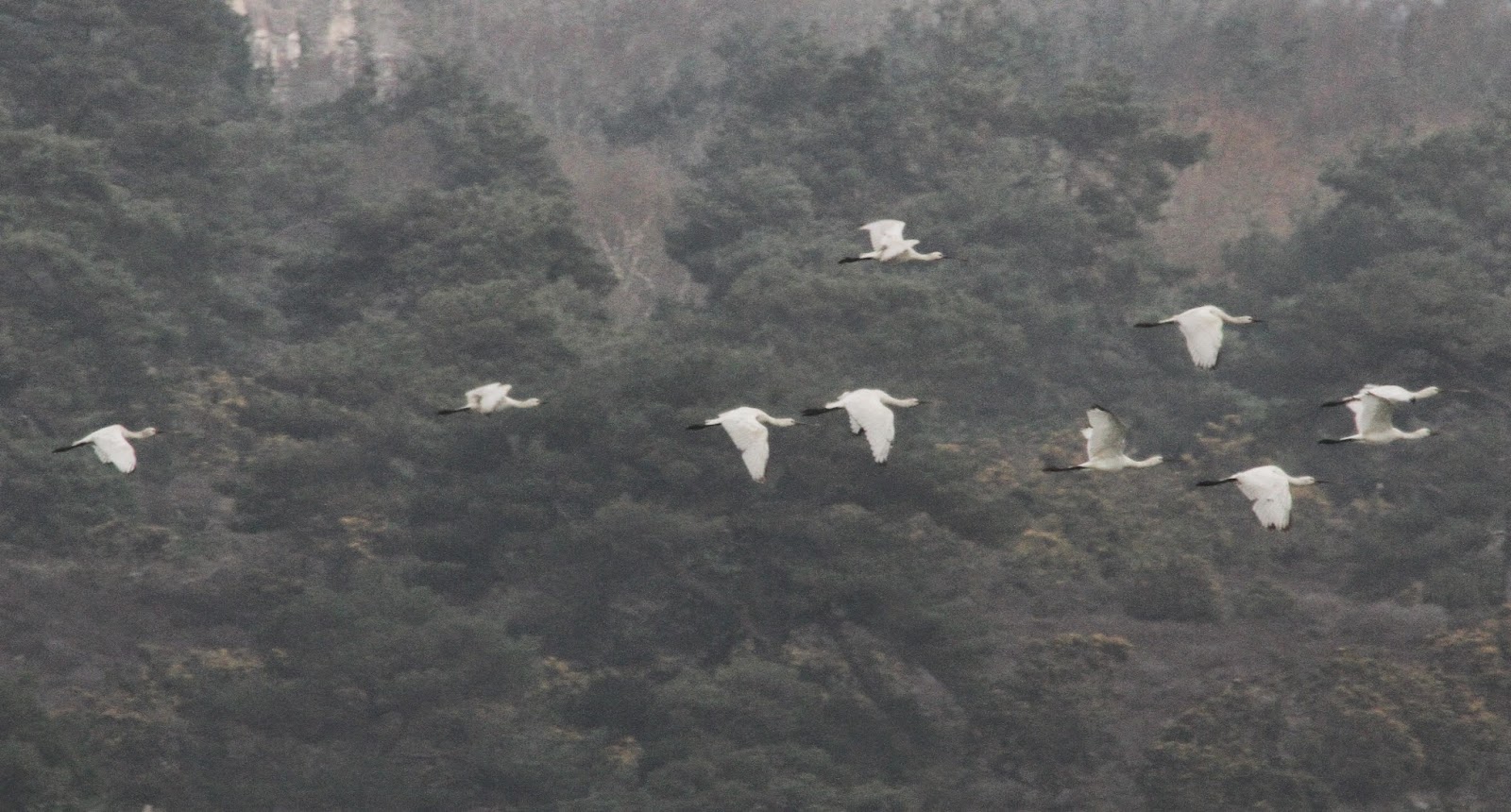 SPOONBILLs
before me, OK obscured a bit by the reeds, but hadn't thus far been seen. 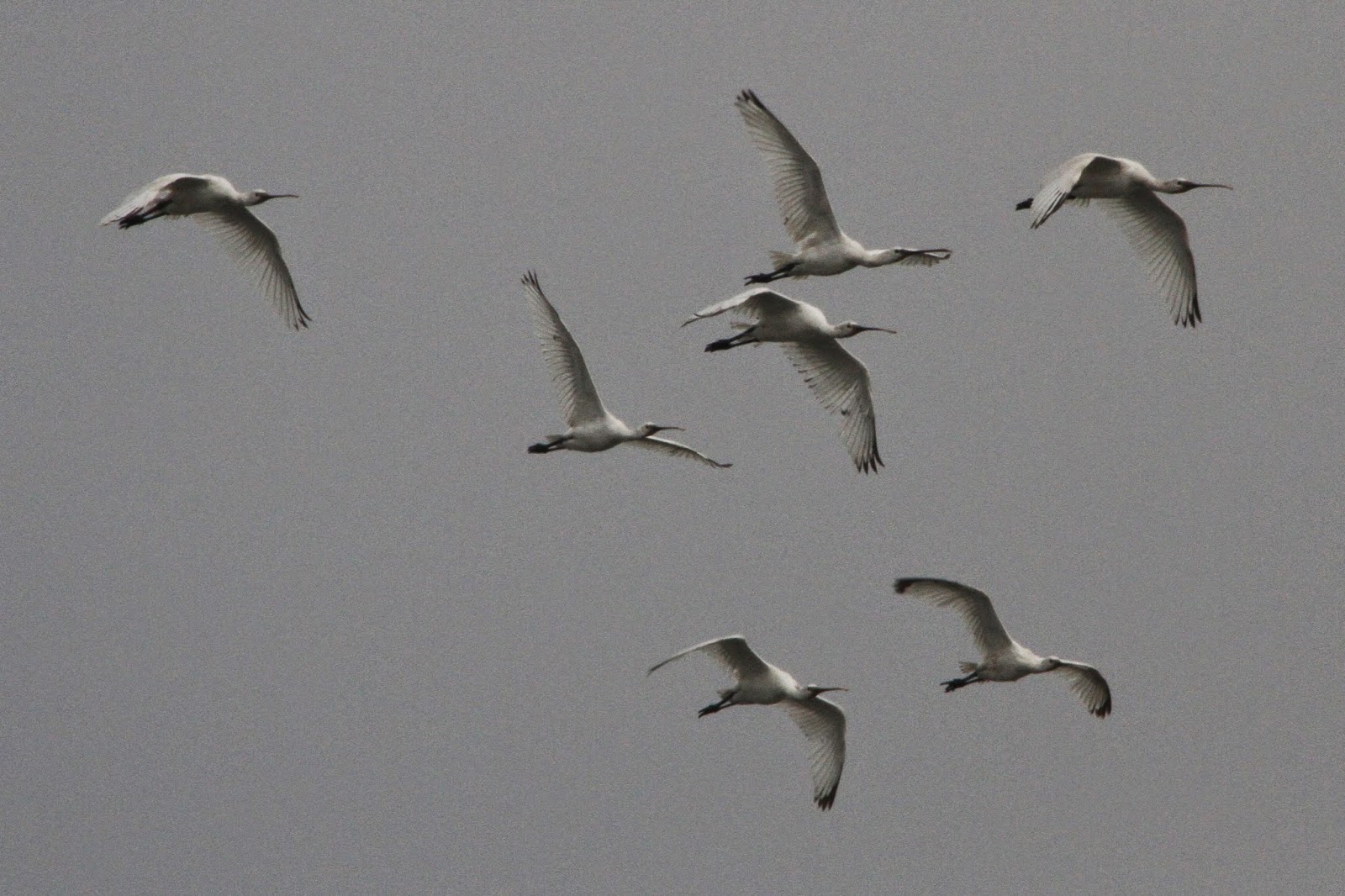 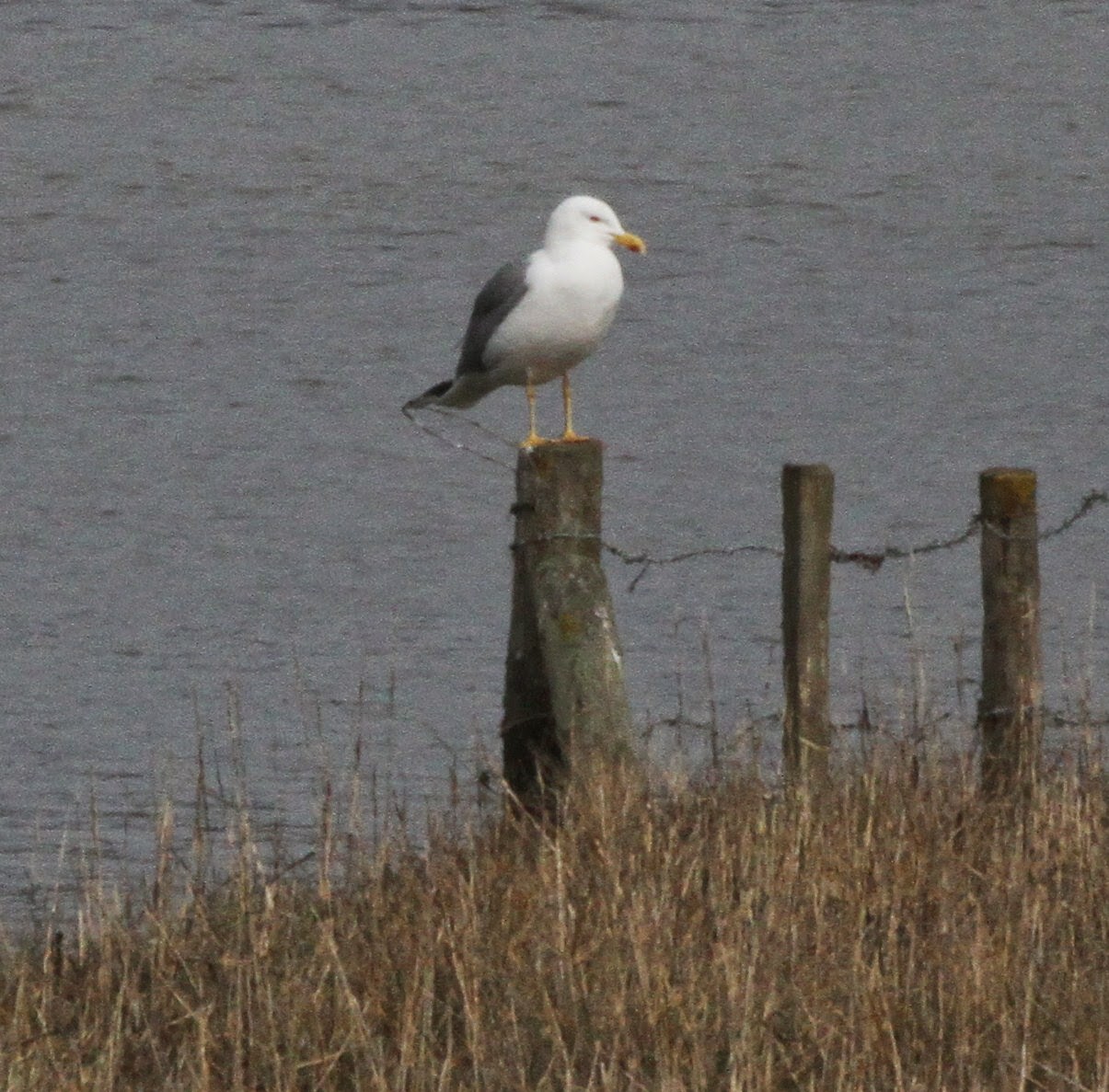 and one of c4
YELLOW-LEGGED GULLs
had not been seen either. 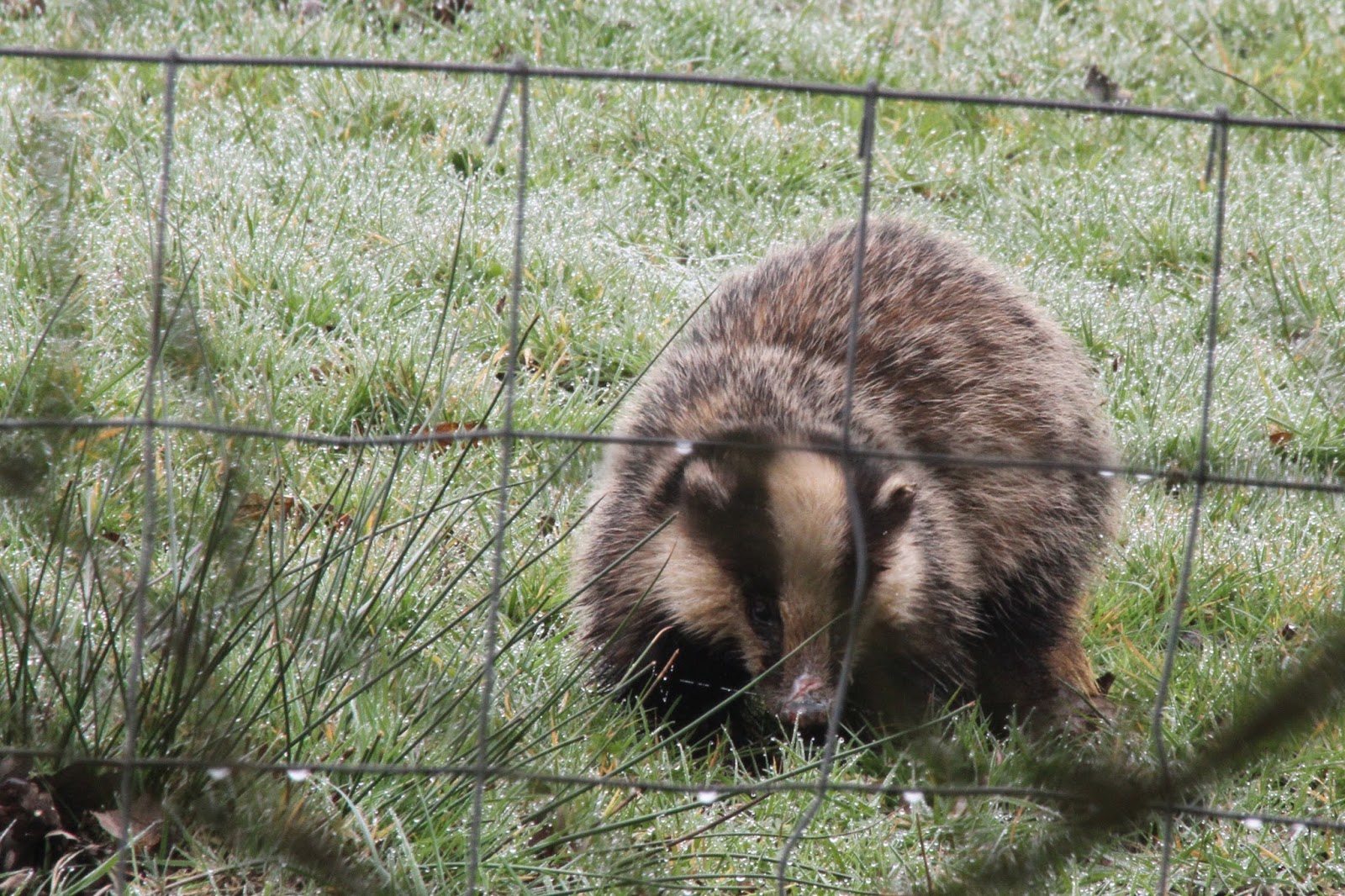 As for the
BADGER 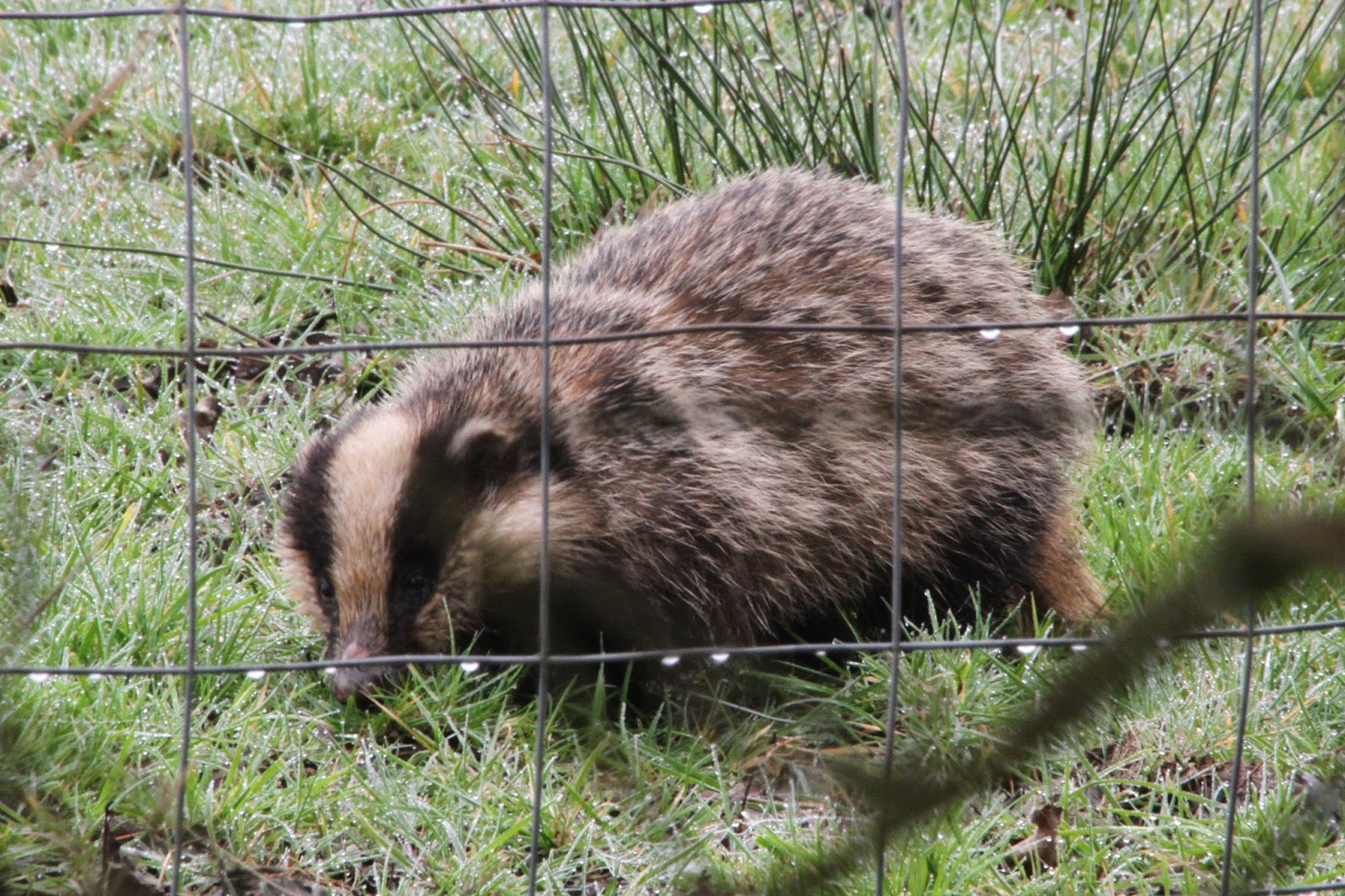 foraging directly outside of the hide, of that it was said
"oh, that's always here".
Yeah OK, but not worth telling me?
Hope this short video clip works.
As the tide dropped back a few more waders arrived, Redshank and Curlew (but not the one sought after) along with Teal and

displaying SHELDUCK
but it was thought time to have a go for the 'long staying' Surf Scoter recently returned to Brands Bay far more accessible than were it has been the last few weeks. The further north and east I travelled the thicker became the fog, when at the Scoter site it was a real Pea Souper with even the chain link ferry Captain activating his fog signal. No point stopping there or at Evening Hill to try once again for Avocet in the Brownsea Island Lagoon and with 6 of the species covered for a total of 2 successes we were needing a stroke of luck. A late message yesterday told of a 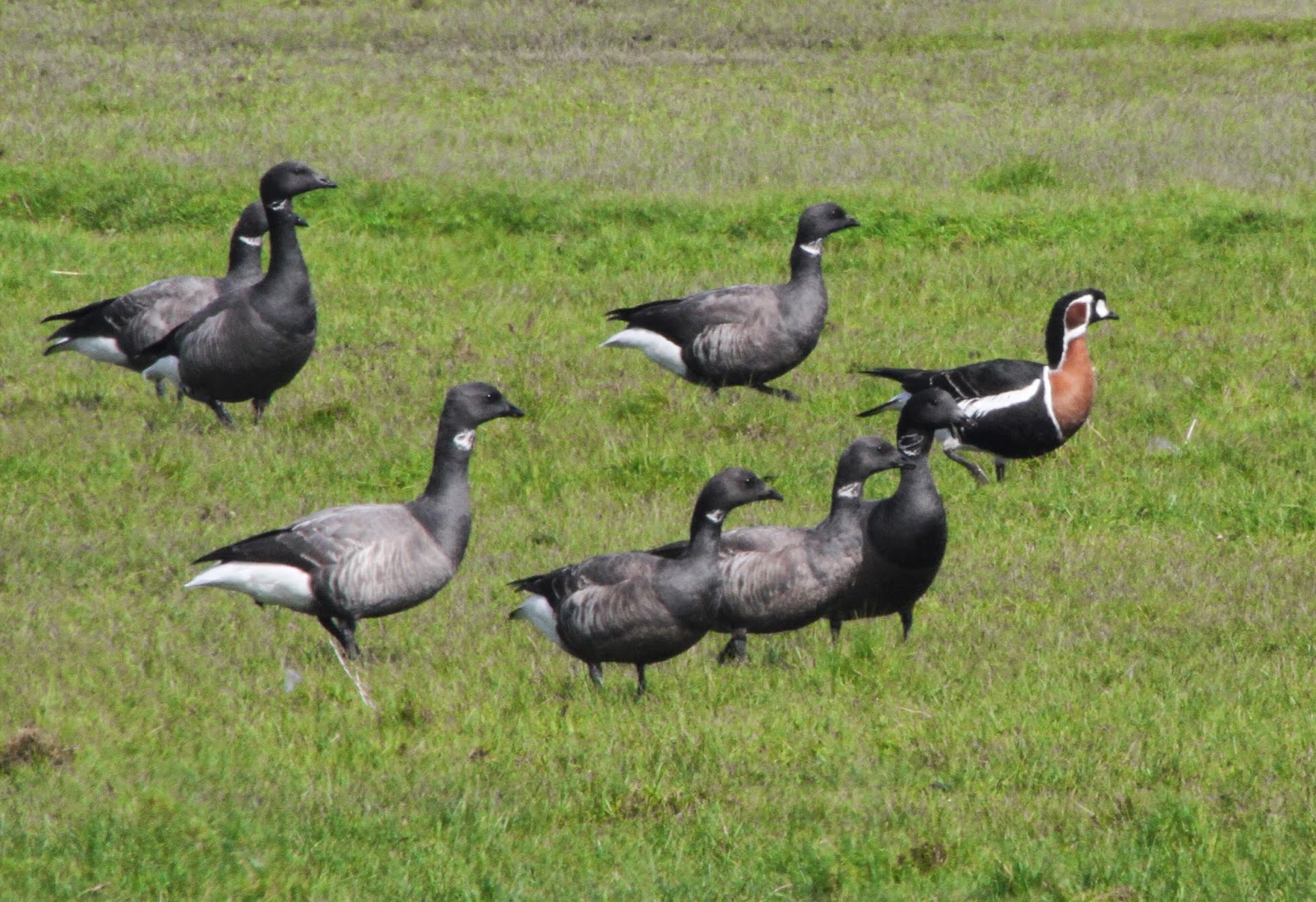 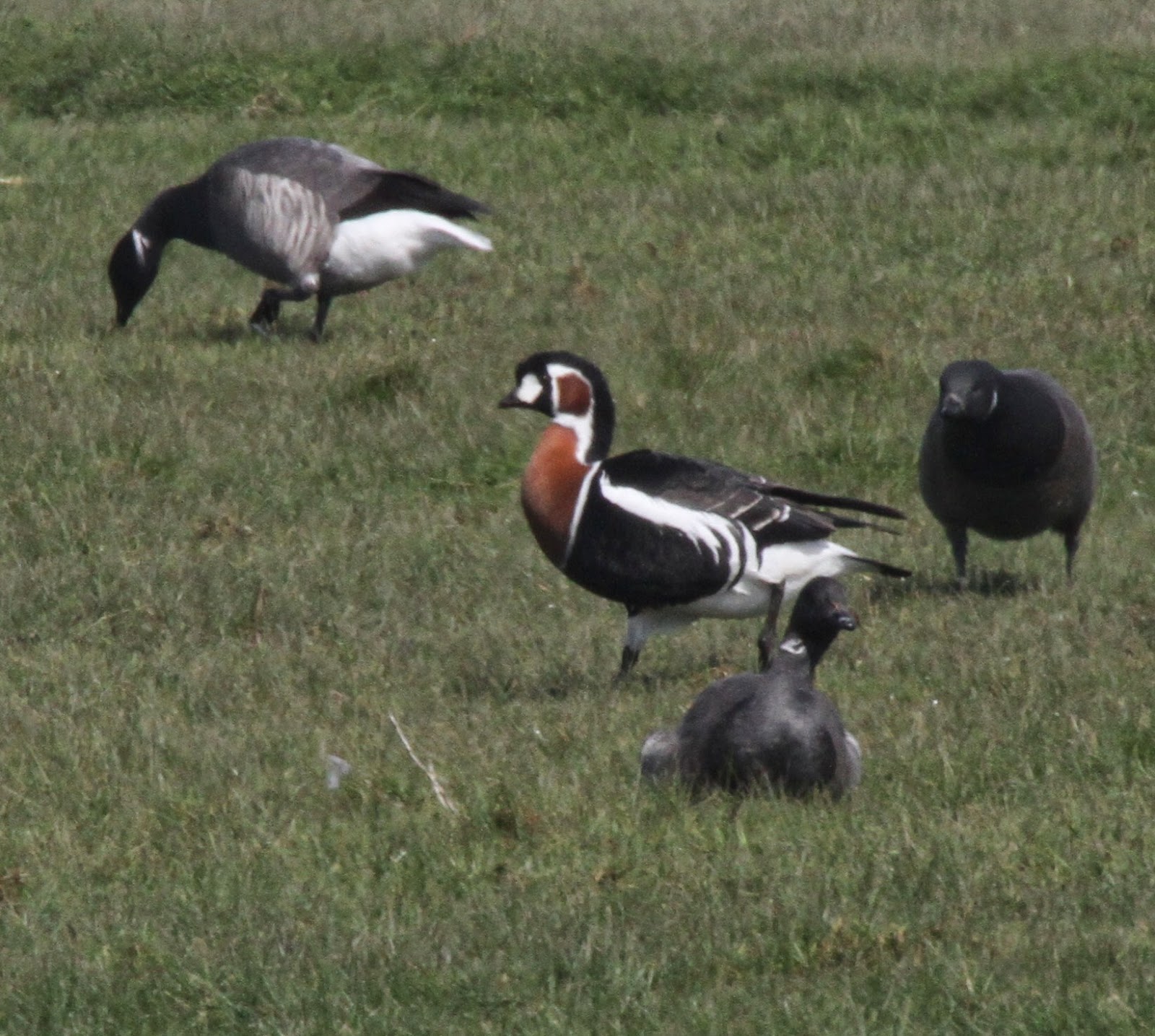 doing the rounds between Stanpit Marsh and Mudeford Quay,
only a couple of miles apart. 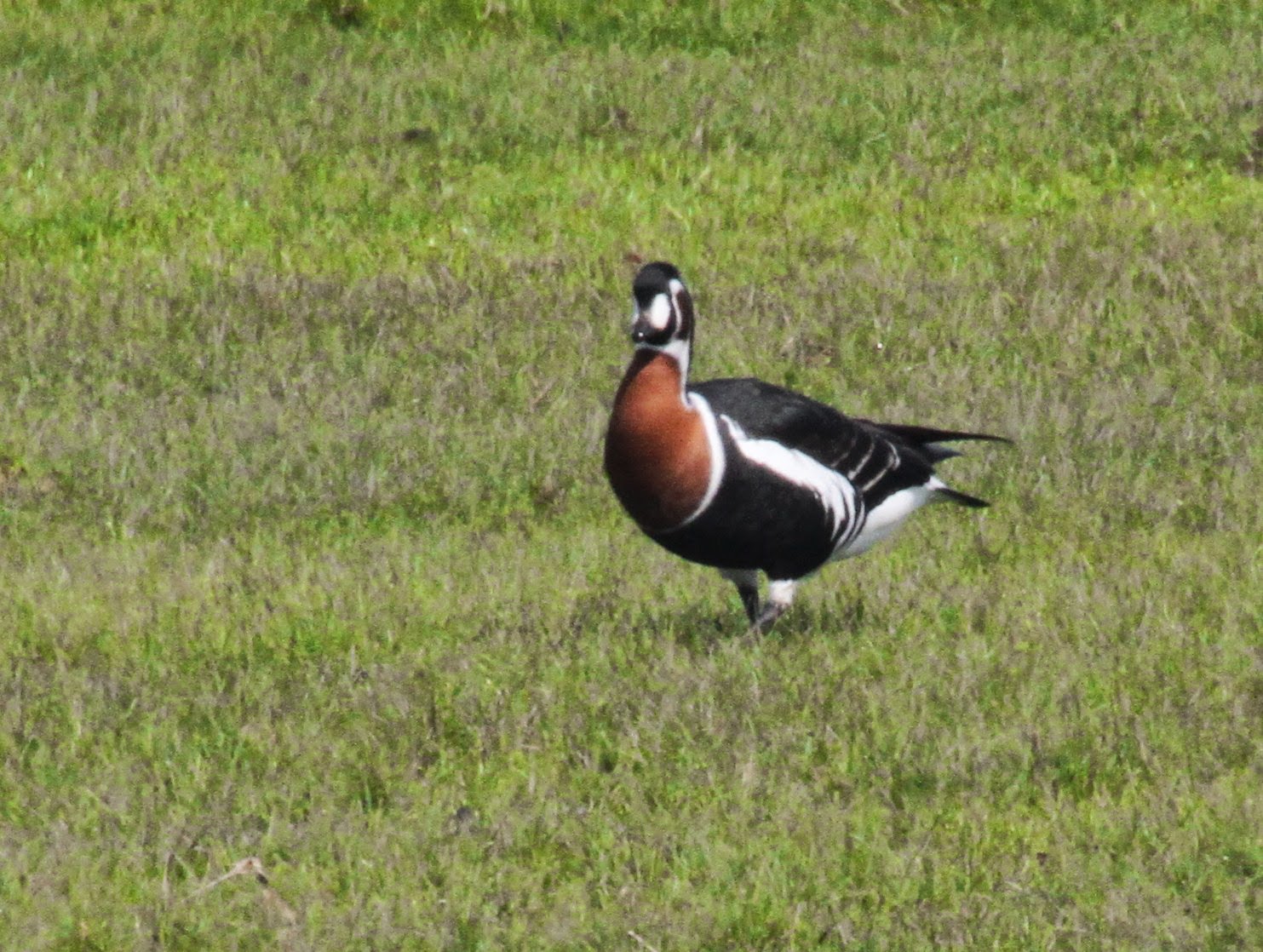 Look at that Beauty.
There had been no follow up on this, roughly interpreted as "I hadn't looked at my mobile phone" and lucky for me that I had even remembered to take it with me!. Sure enough it was still at Stanpit and thanks to my Friend in a High Place it also reached the April List. Just one more of the 8 remained and thought rather more as a formality it was off to Hurn where it was conspicuous by its absence. A small hint of panic set in as the Sopley Graveyard was visited as a vantage point across the water meadows there, but still no joy. Avon Causeway was worth a try but they hadn't been there since the beginning of the Great Flood, so what chance now? No need to scratch your head, the answer is NONE! Time to give up methinks but a final roll of the dice sent me into the next lay-by where, some way across the field were c2 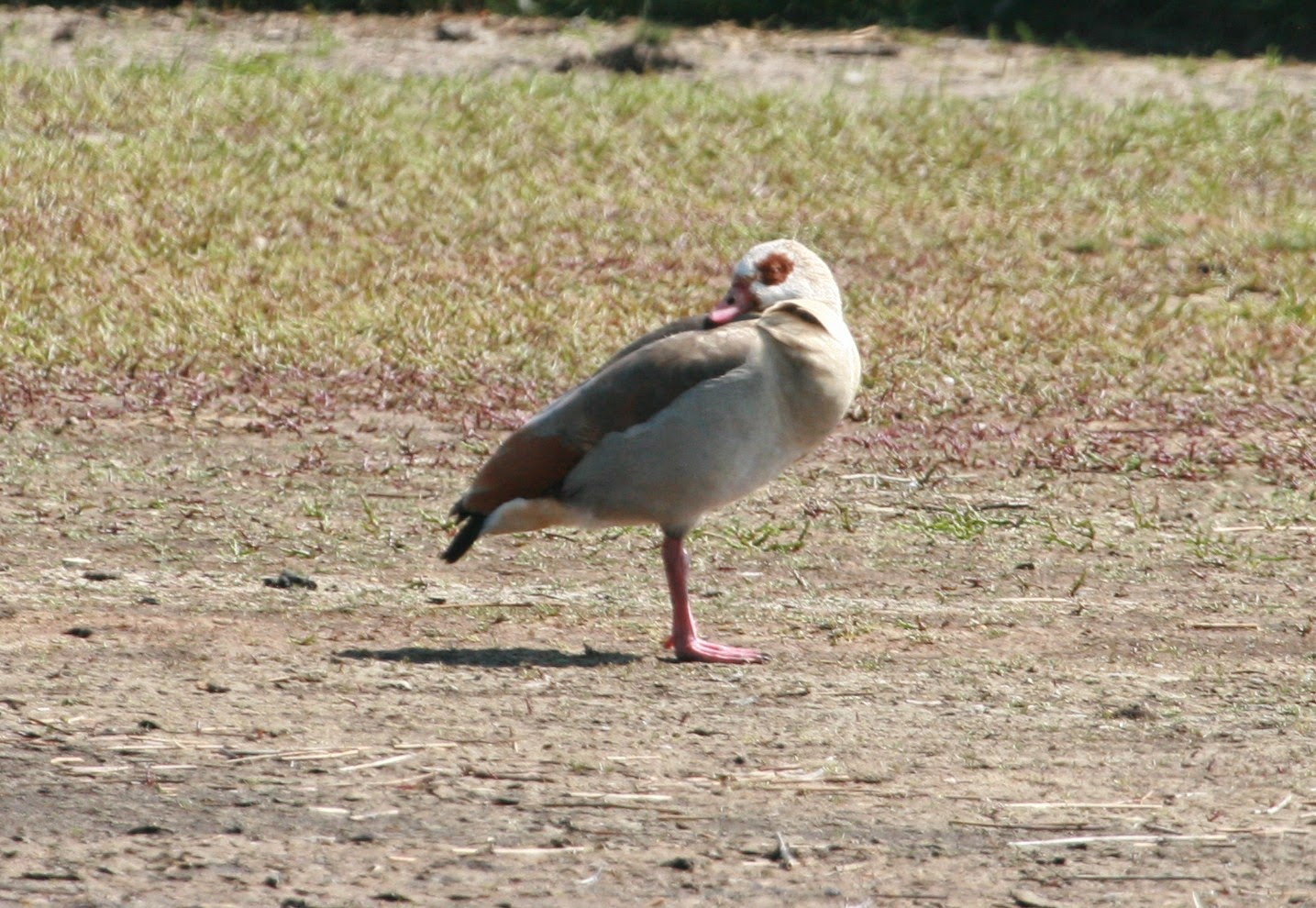 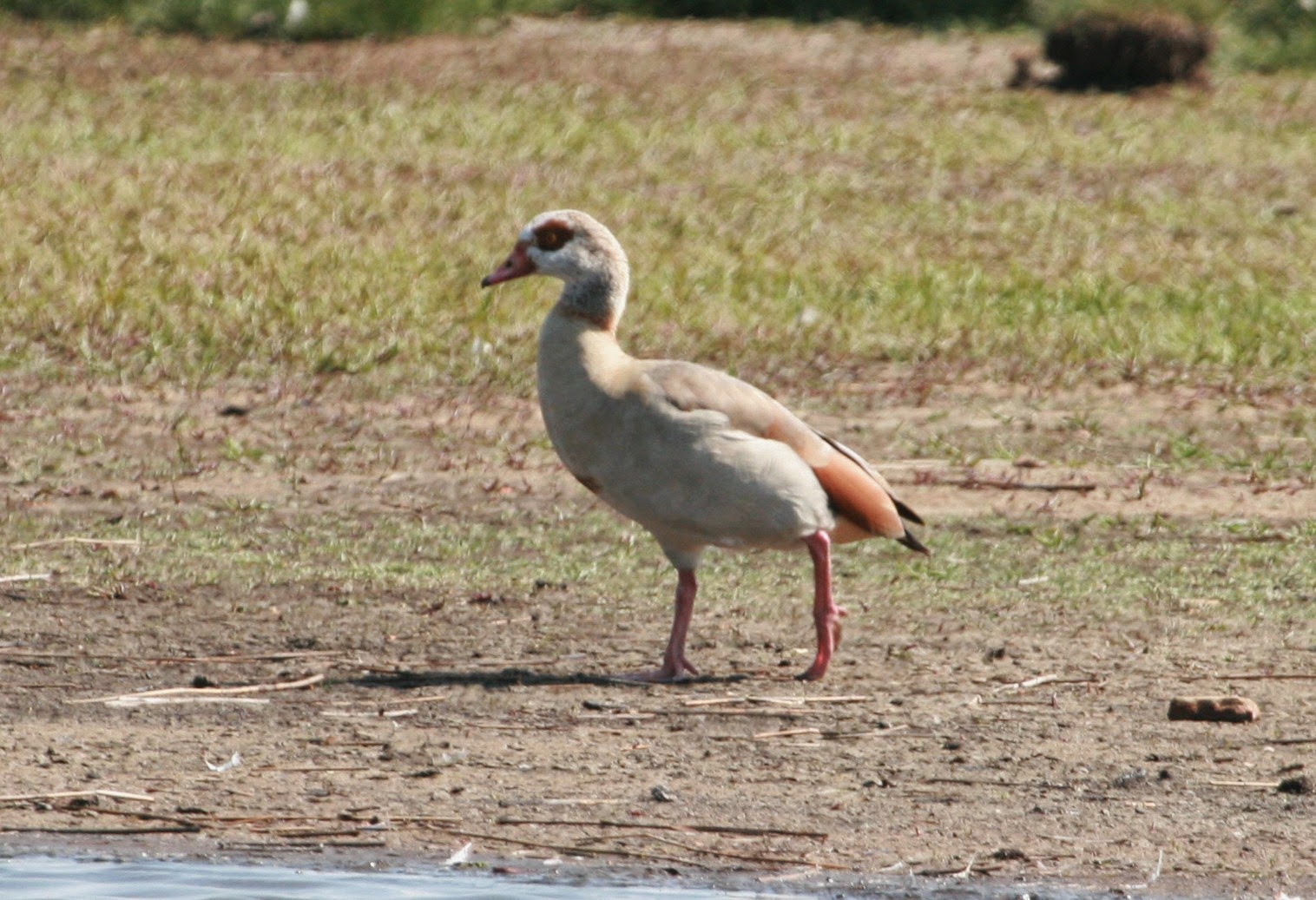 It may be asked why this seemingly common bird remained absent for April during all the years I have been birding, and the answer is simple. While they are resident in the county they rarely stray any further west than Christchurch, and a cause for a little excitement when one is found say in the Weymouth/Portland area. Since staying here it has been added to the Jan, Mar and now Apr Lists but could not be found throughout February, so we have to wait a further year to get the full set of 12.
YESTERDAY WAS A VERY EXCITING AND MOST INTERESTING DAY FOE ME,
I HOPE YOU HAVE FOUND THIS POST THE SAME!
Posted by Bagsy at 16:52