Although GLOOMY this morning (we can do GLOOMY) the heavy rain band predicted to hit us at about 05:00 fortunately didn't materialise, and held off for all of the morning. However, as we take our seat to scribe today's epistle, at 14:00, the heavens have just opened and it looks like there is plenty more to come.
A gathering of
STARLINGS
as we collected the Moth Traps this morning.
Within, were good numbers of Insects
and while nothing Rare or Additional there were a couple of flurries of Interest. 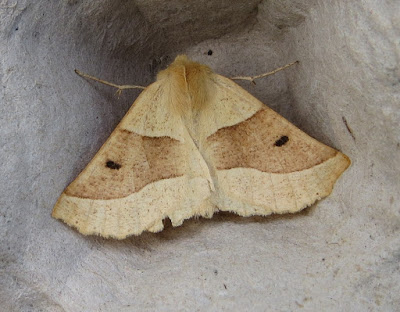 SCALLOPED OAK
not recorded for a while now. 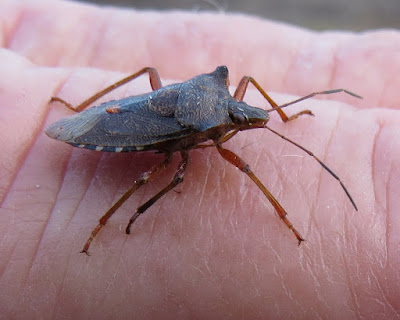 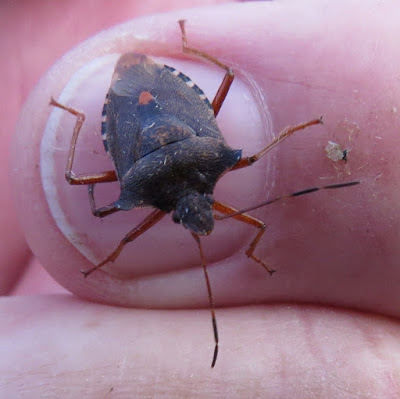 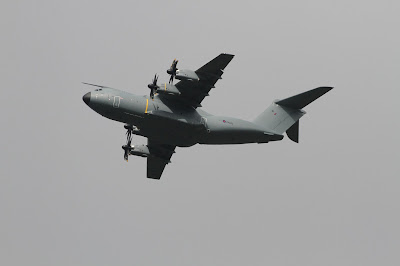 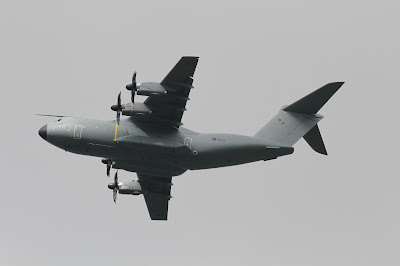 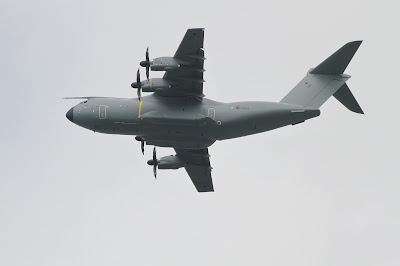 the
AIRBUS A400M 'FLYING TRUCK'
well worth the interlude wouldn't you say?
to continue 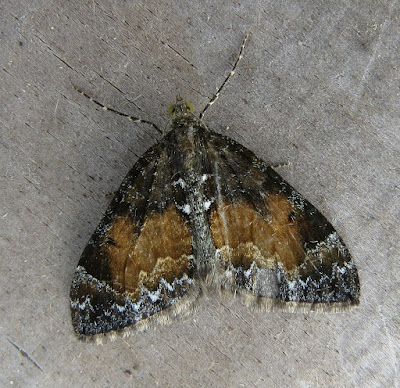 As the name suggests this is by no means a scarce Moth but, 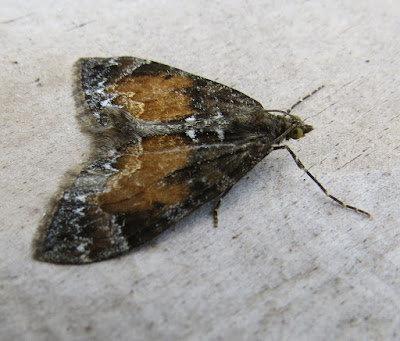 like many individuals of the 'Carpet' Family being so delicate they
are often damaged to one extent or another.
Excellent then to see such a pristine 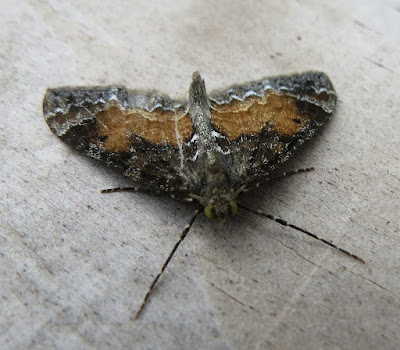 COMMON MARBLED CARPET
and 'finally', from the traps that is, this was immediately a 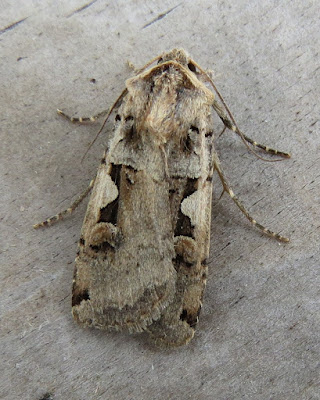 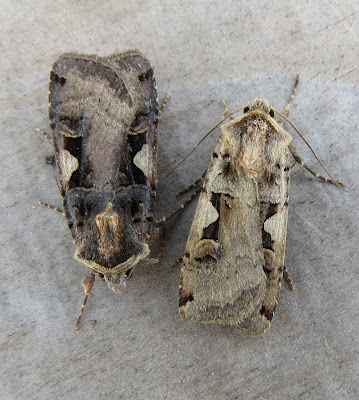 but so strange looking being so pale.
Doubt that this is as unusual as might be thought, but we have
never seen one like it before!
Over the past week or so there has been a little apprehension about
a plant that has sprung up amid the Game Crop sown during early
Summer to give the Pheasants some cover and food. That was my
first destination this morning to see what all the fuss was about.
On arrival c2 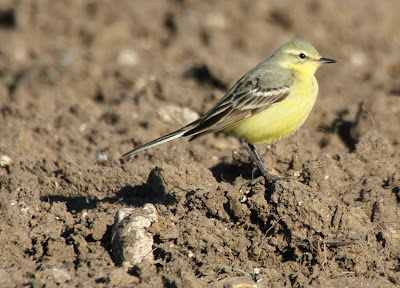 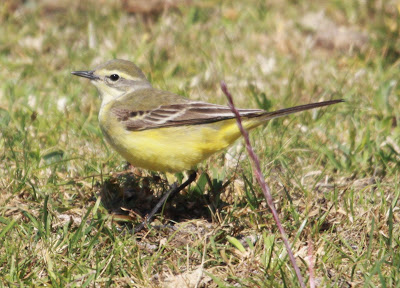 were flushed from the edge of the field before we continued the investigation. During my life and particularly during extensive travels lots of
MARY JANE
has been seen growing in various countries as a crop, in private gardens
and even by the roadside as was the case in 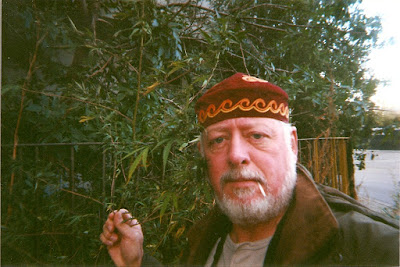 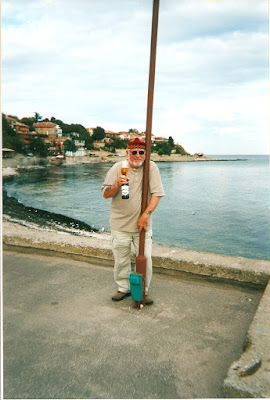 BIG FAT BILLY
seen here supporting his Ol' Dad
"I still don't think that Marijuana was kosher Billy"
so we have a rough idea what it looks like. 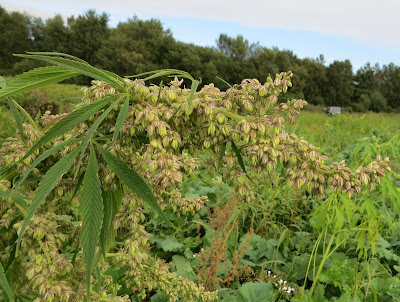 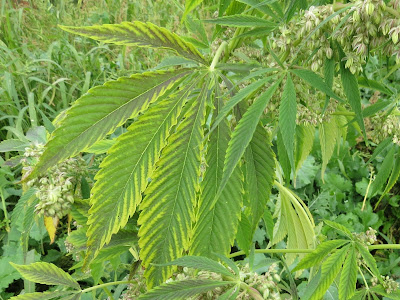 Well, it looks something like it, although the leaf doesn't look quite serrated enough 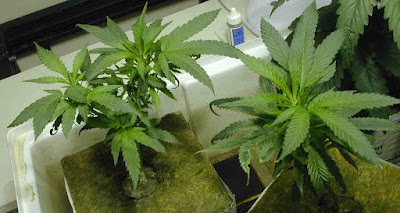 compared to the Hydro Grown Plant (Wiki).
Just to be on the safe side this plant will be destroyed tomorrow!
Inspection completed and images sent off for a second opinion, within
5 minutes we had encountered c2 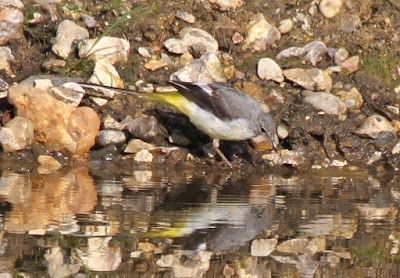 GREY WAGTAIL
and in short time, to make up the 'hat-trick' a small group of 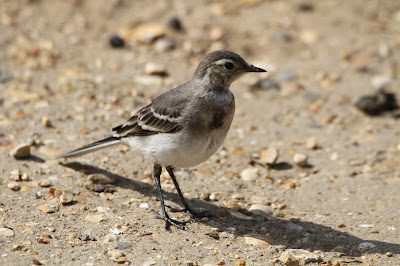 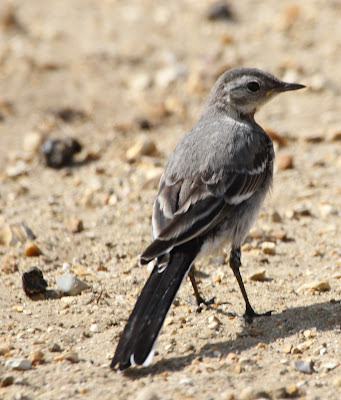 PIED WAGTAIL
As we go to Press the rain is still 'chucking it down' but
this is only Part One of today's offering. As we are indisposed for all
of tomorrow, it would seem unlikely that we will have time to publish a
Post. Therefore, the remainder of today's action, complete with images
and video clips, will be published tomorrow.
MANY THANKS FOR TUNING IN!
O, to be in England now that Autumn's (sic) there!
Robert Browning
If it keeps on raining - yes we know!
Just to Prove CRAFTSMANSHIP is Surely Dead
The Music is Pretty Solid too!
Our THANKS to Willie Wine for yet another
Magic Moment
Posted by Bagsy at 17:30