The Geese and the Ghost - Anthony Phillips

A little reminiscent of Lady Anne's Drive, Holkham on the North Norfolk Coast, albeit of a far less 'wild' origin, is there anything quite like the sight and sounds of a skein of Geese crossing the early morning sky? 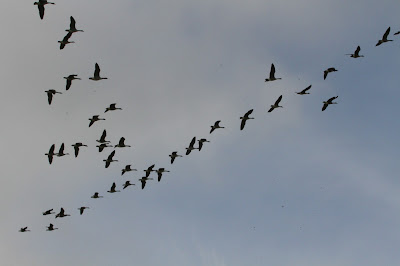 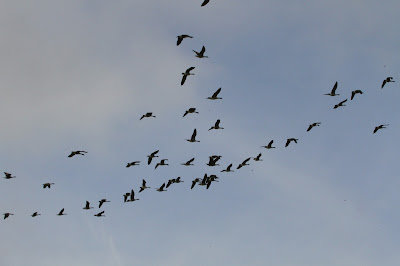 and others (Greylag and Egyptian) on the wing 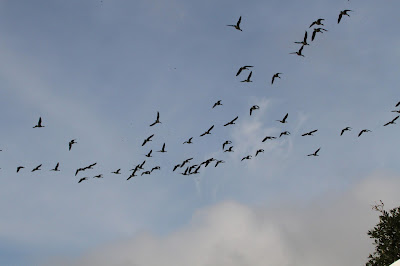 are now very much part of our rounds of the Moth Traps.
Now, we are well aware that many of you among our ranks of Valued Readers
are not over-struck on the subject but, it is a 'natural fact' that without such creatures,
the bottom end of the food chain, all else would be lost.
Add to this the immensity of the genre with regard to numbers, size, shape, colour, pattern etc
it is little wonder that this is the fastest growing 'hobby' in Great Britain at the moment!
Even at this 'late date' we are still seeing great success at our Traps with the following sequence,
all taken over the past few days, proving that persistence pays off!
The images are presented in what we consider to be
Best Left 'Til Last. 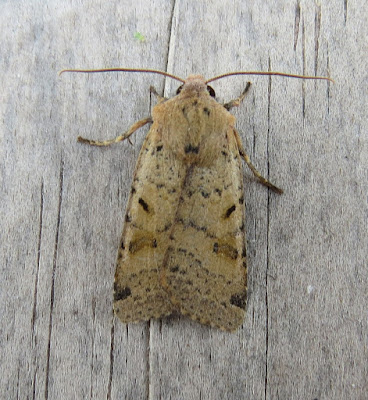 With the rapid decline in recent days of
Large Yellow Underwing 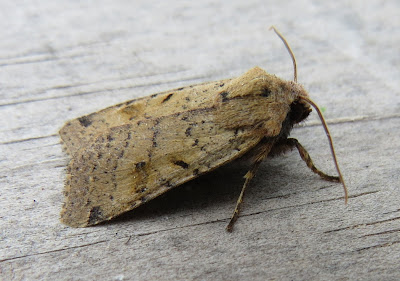 BEADED CHESTNUT
is now by far the most numerous and common among the Species. 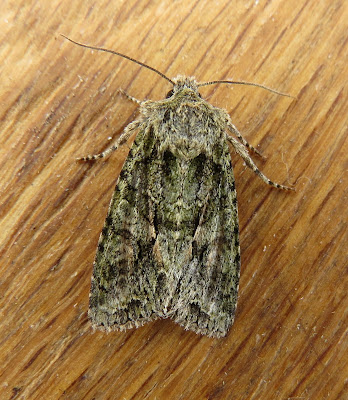 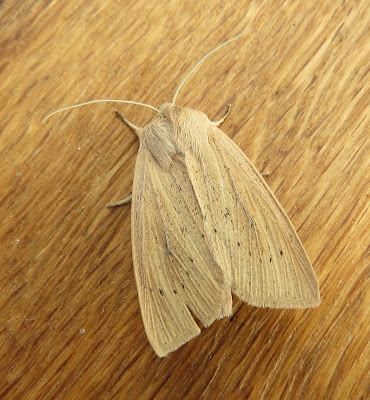 LARGE WAINSCOT
have been absent altogether during October, while following
on from our last Post this 'WONDERFUL' 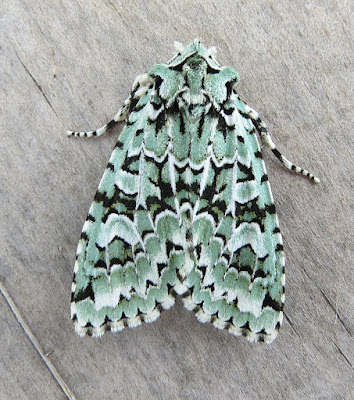 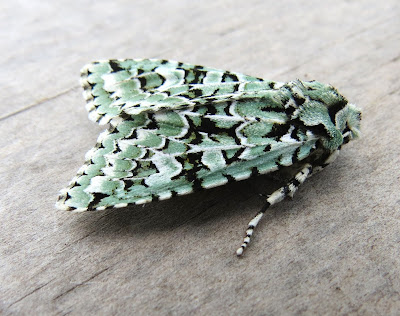 becomes the 13th (unlucky for some but not in this instance) for 2016.
In sharp contrast 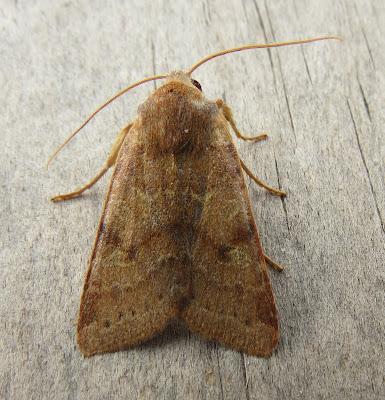 FLOUNCED CHESTNUT
is our first for the year, and only the 3rd ever taken here,
but all pale by comparison to what happened next.

Reaching the 5th, final and historically least productive trap, at the edge of the Oak Wood, the last egg tray was lifted for inspection with beneath what looked every bit like a dead leaf. As any Moth'er (married or unmarried) will tell you there is something of a 6th sense about such things so on closer examination it was popped into a pot and later photographed and released,
"wake up at the back"!
After the usual blood, sweat and tears, often associated with
never before seen Insects and well beyond my pay scale, it was
sent off to higher authority and confirmed as a (rather worn) Moth known simply as 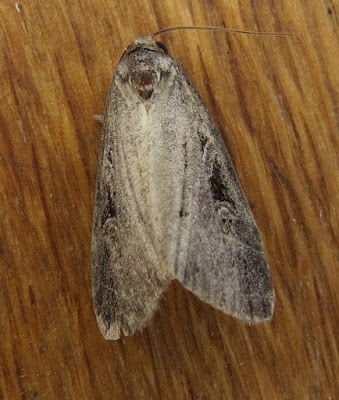 ANOMALOUS
(an adjective which describes something deviating from what is considered
standard, normal or expected [now where have we heard that before]). 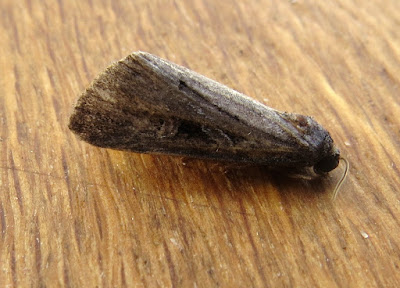 'OVERJOYED'
at the prospect of the 438th addition to our
Recording Area Macro Moth List,
this will also be the 15th for the year.
Next was to turn to my favoured 3 Authorities on the subject
Skinner, Manley and Clancy
to read up on it but far more importantly the
Dorset Moth Group Website
where it may be found under Species Accounts - 2394
In brief, the above describes it as a Scarce and Restricted Resident on the wing during August and September which, according to the records available, has never been caught in the month of October here in Dorset. The first County record is from 1886 since when there have been in the region of 90 further sightings of more than 120 individuals, amounting to less than 'one' per year. It's stronghold, if it can be described as that, are the Heathlands at the southern edge of the Poole Basin, favouring Bristle Bent (Agrostis curtisii) Grass as food plant. It may be of note that the Heath not 2 miles from where this one was caught is made up of several acres of this plant.

"OK, you can nod-off again now".
If however you are still with us at this point, there is a
reluctance to continue for fear of loosing more
Valued Readers
but feel this item should be added before it gets too stale!
While considering myself a less than average Wildlife enthusiast,
there are those around me who amaze and astound me just about at every hurdle.
While the DTG (date/time/group) is lost in time and of little importance really,
it was a great pleasure to take lunch with 2 of them in the Royal Oak, Bere Regis
a few days ago. My arrival was straight from the 'field' where a condidered 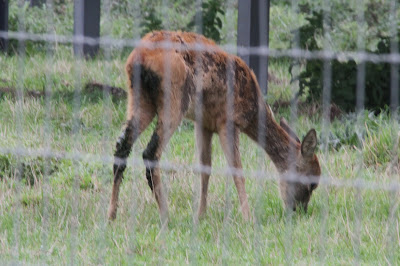 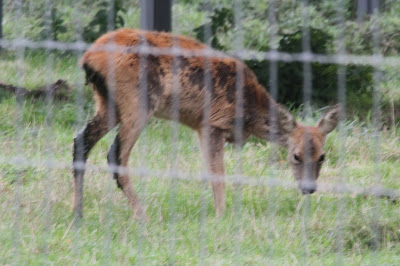 These images were shown to John and his sister Maggie Gifford but, with not a pair of 'Gregory Pecks' between us, the full picture could not be seen. With only a camera screen view available John pointed out that it may not be a Roe at all and with 100% reliable reports of Munctjak in our area (not thus far seen by myself) hopes were high. Arriving back at Slight Return II late afternoon, priority were these shots which were immediately considered of the original ID, but sent them on to John nonetheless. The following morning his prognosis was received thus:-

1935/7, yes a Roe Deer, looks really scruffy as it changes into its winter pelage (coat) but it also seems there is something else wrong. Deer poo is similar to Sheeps/Goat, basically little balls all joined together, but this animal has got the Scours (loose poo) which normally indicates a bad case of intestinal Worms, you can see evidence of the scours on the hocks and under/around the tail area. 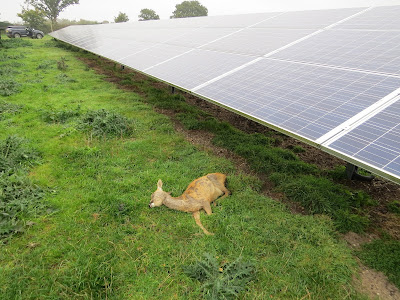 This is what was found the following morning! 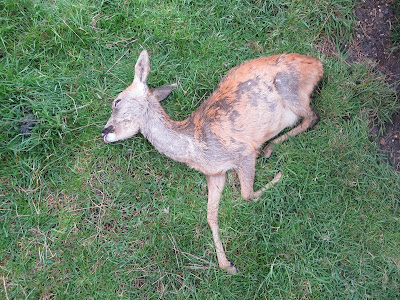