Inevitably, the time arrives to move on with my next destination requiring an overnight stop on the Caribbean Island of 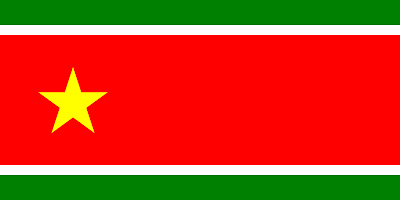 GUADELOUPE.
My second visit in as many years, as we were there the day before Christmas Eve while onboard The Voyager. With just a 12 hours stop-over there were going to be no taxi rides into town, fancy hotels or any of that malarkey, no it was 'head down' in the airport time. There was however still a couple of hours of daylight spent in the surrounding vegetation, where the bird list comprised of 26 species. Settled on the seats adjacent to 'check-in', I was moved on by Security but only to the lower level where an otherwise undisturbed kip was had. An early take-off, fueled by plenty of coffee and a second helping of very good in-flight sandwiches, soon had us cruising high above the southern coast of the Dominican Republic bathed in bright sunshine. That is when the scenery changed dramatically from lush, pristine Rain Forest to bare, scorched hill and mountainsides, we were descending above 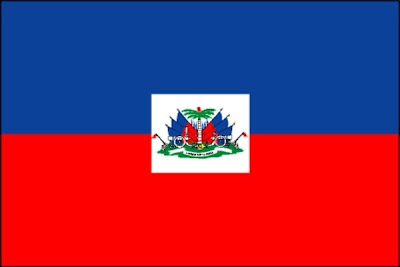 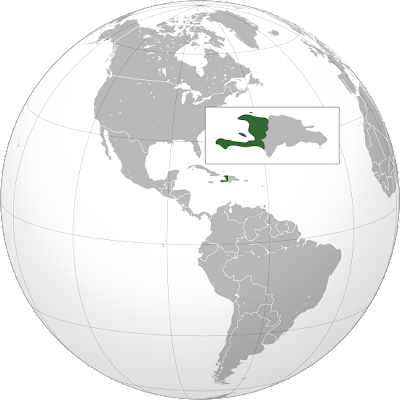 My boyhood memories of this country amounted to just snippets on the BBC New of some atrocity or natural disaster that had occurred there, with always foremost in each broadcast the names of Papa Doc and/or Baby Doc Duvalier. Father, François (who won acclaim in fighting diseases, earning him the nickname), and son  Jean Claude (who succeeded him after his death) ran the country for decades on murder, fear, torture and voodoo, ably assisted by the vile Tonton Macoute, eventually declaring that they were God personified! Little wonder then that over the past week or two I have been having reservations about this visit, but leant on the immortal words "faint heart" and "fair lady" but we had already landed at 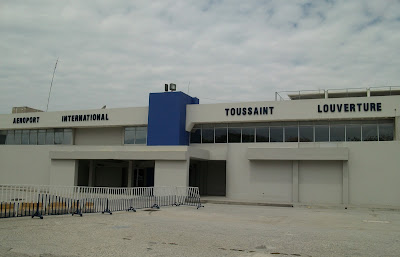 TOUSSAINT LOUVERTURE
Port-au-Prince
so no going back.


Courtesy itself greeted us in the terminal building, with some of my doubts put to rest, the lady Immigration Officer greeting me with a warm smile and friendly welcome, porters asking politely if I needed a hand while taxi drivers formed an orderly queue to tout for business. Best was yet to come as I looked, more in hope than anticipation, for Tourist Information finding a smartly dressed young man who quickly got me in touch with a Guest House found on the Internet before leaving England. 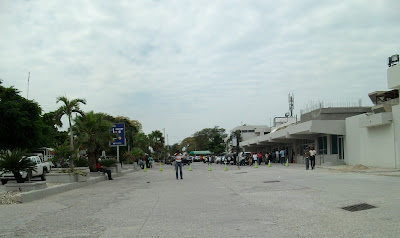 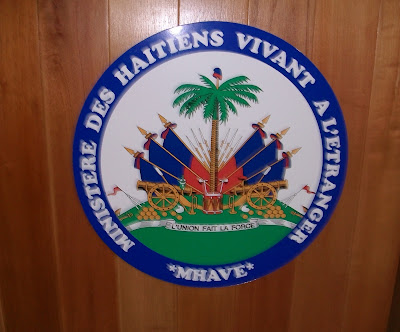 Coat of Arms
Ernso Jean Louis owner, along with his wife Gina, of the Eucalyptus Guest House was there to pick me up within 20 minutes, assuring me of a place to stay regardless of duration, and as we drove along chatting I simply pressed the camera up against the wind-screen. 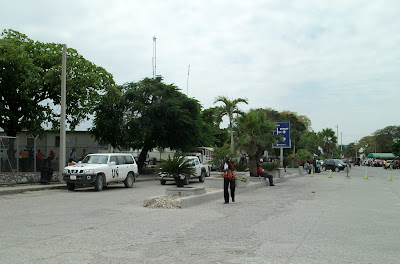 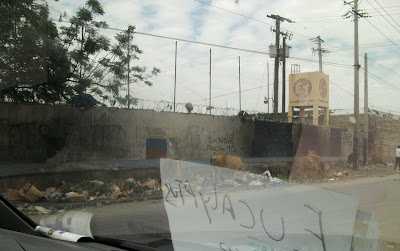 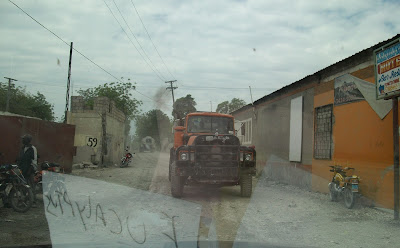 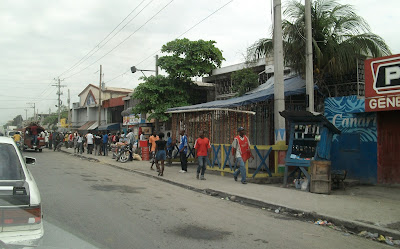 The capital Port-au-Prince was still somewhat 'broken' prior to the 2010 earthquake, but was most definitely 'getting onto its feet', but was and still is the most impoverished country in the Americas. According to the 2003 census the cities population was some 705,000 but, during the short time span, is now considered nearer 3.5 Million! 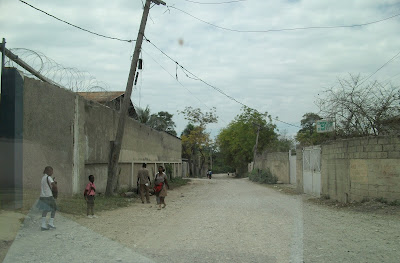 The highest reliable death count was estimated at 220,000 although Haitian government estimates were higher, while 250,000 residences and 30,000 commercial buildings had collapsed or were severely damaged. 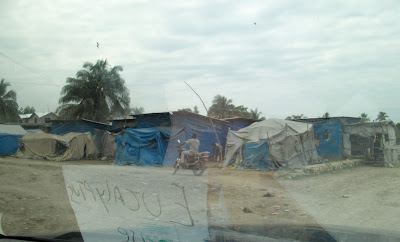 In its wake, 'tented communities' have sprung up all over the city, with the largest, thought to accommodate more than 'One Million People' is marked on the map as Petionville Tent City! 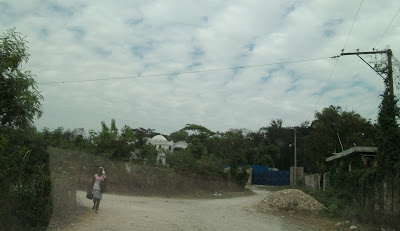 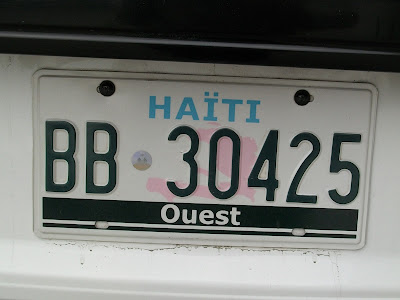 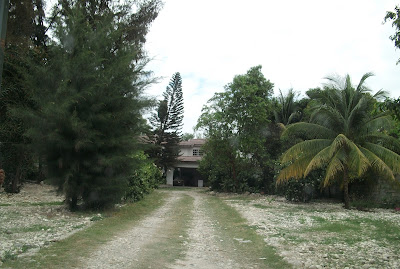 We were soon at EUCALYPTUS and time to introduce you to 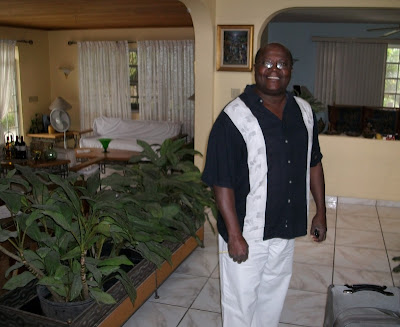 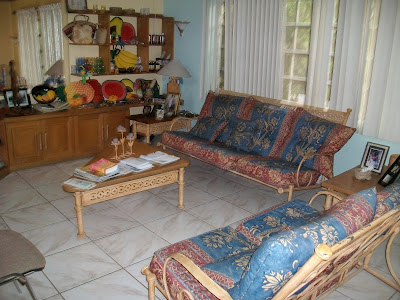 and his fine establishment. 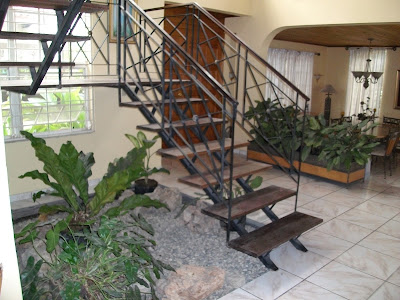 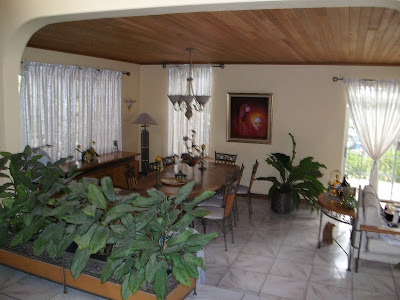 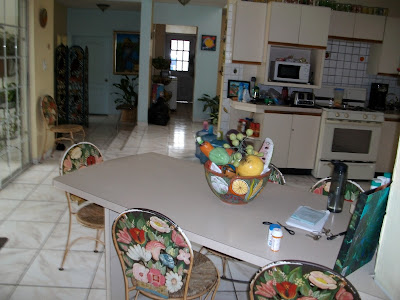 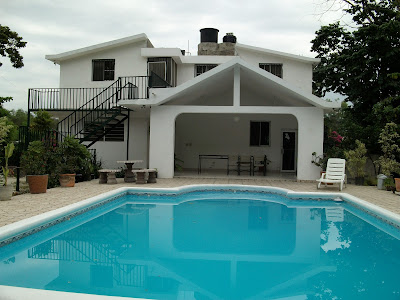 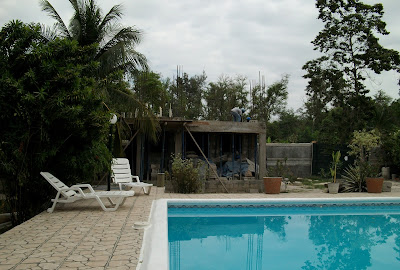 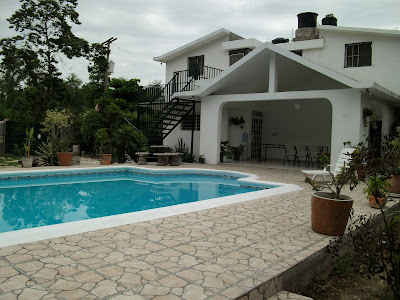 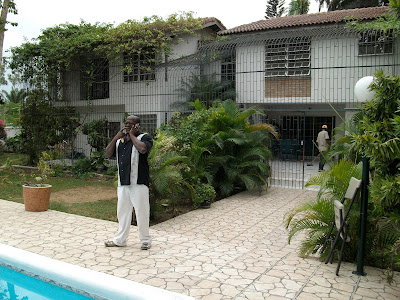 Ernso appears to be on the phone 80% of his life?
Either he has a lot of friends or there is something else afoot! 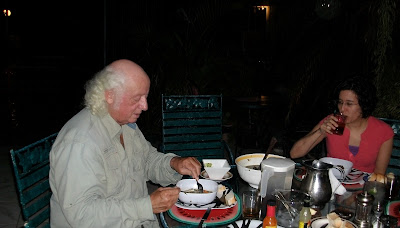 For my $40 per night I am getting bed, full al fresco
breakfast and dinner plus the company of
Medical Student Sarah from New York City. 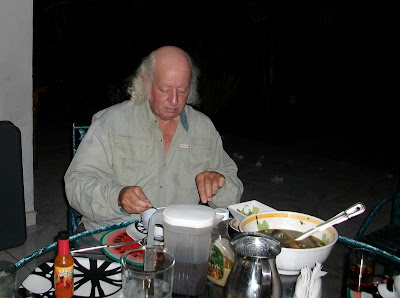 GOAT STEW
All the food is home cooked, local Kreole (that's how they spell it Sheila and Janet) style and delicious.
Finally, amid all this devastation, Eucalyptus Guest House stands on the edge of what is left of the forest. From here you can see that some of the trees have been savaged, but what would you do in similar circumstances for your only natural heat 'fire wood'. Only 3 guesses where I'm going to be first thing in the morning.
Posted by Bagsy at 18:57